The students appearing for the class 10 board exams of 2018-19, would have to attempt 100 marks paper for these subjects. 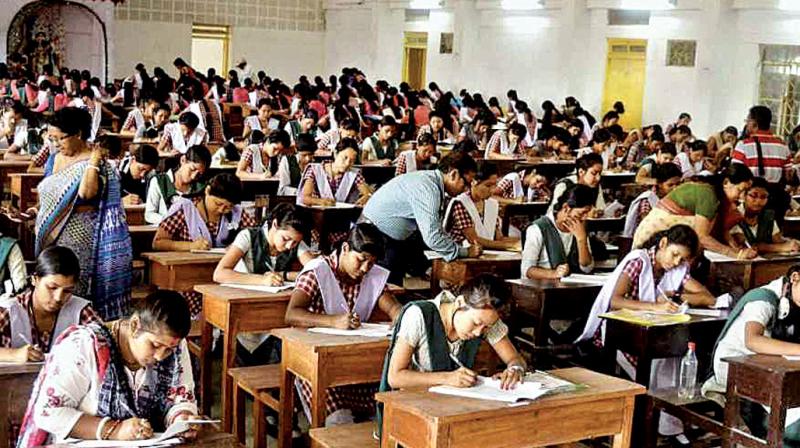 According to board officials, the students will have 20 marks practicals for Mathematics and Science. But all other subjects including languages, will be conducted for 100 marks. (Representational image)

Mumbai: The Maharashtra state board have scrapped internal assessment carrying 20 marks for Class 10, except for Math-ematics and Science.

The students appearing for the class 10 board exams of 2018-19, would have to attempt 100 marks paper for these subjects.

According to board officials, the students will have 20 marks practicals for Mathematics and Science. But all other subjects including languages, will be conducted for 100 marks.

The oral examination marks for la-nguage subjects have been scrapped because the schools alleg-edly gave full marks to the students for increasing the passing percentage of the institution.

“We received too many complaints regarding instances of schools giving away 18 or 19 marks to the students in their oral exams. Though it would benefit the students, it is harmful when it comes to quality of the percentage they score. Hence, the idea was initiated by the state government to scrap the internal assessment,” an official from the Maharashtra State Board of Secondary and Higher Secondary Education (MSBSHSE), Mumbai division said.

Till now, the board followed 80:20 marking pattern, which consisted of 80 marks written examination and 20 marks for internal assessment. Internal assessments consist of oral exams, which are conducted at the school level.

Whereas, the 80 marks exams are conducted by the state board. While preparing the mark sheet, both the marks are combined and accordingly average percentage is finalised.

However, with the 100 marks pattern, the board would give the entire mark structure.

Meanwhile, education experts feel this move is biased as other boards such as IGCSE and CBSE have 40 marks as internal assessment, which may backfire the SSC students during FYJC admissions.

“This can be a good move if the government is trying to eradicate the push and pass policy of the state schools. Howe ver, it can also be termed injustice as every other boards in the state has internal marks,” said Rajalakshmi Shivbalan, a veteran teacher.

According to sources, the cancellation of internal assessment may even be implemented in the Higher Secondary Certificate (HSC), except for the Science stream, which has practical exams carrying 20 marks.

In the academic year 2017-18, the state board had scrapped the internal assessment for Class 9.