Fire breaks out on 22nd floor of Air India building

Three on-duty fire officials rushed to the floor after the building’s fire alarm rang out from the fire control room. 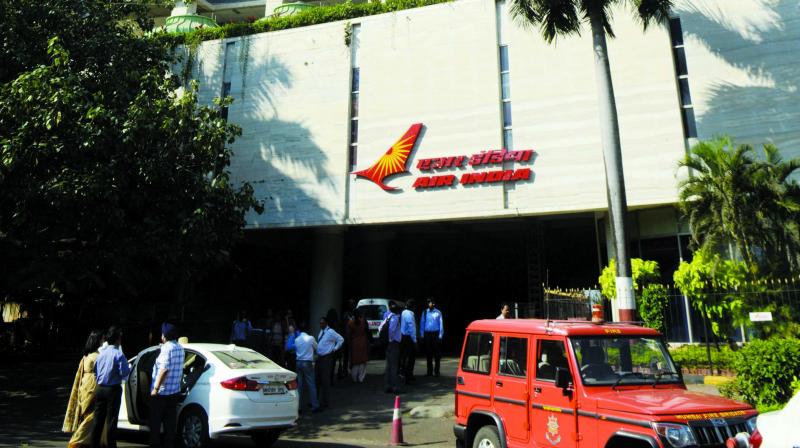 The fire was due to a short circuit. (Photo: Rajesh Jadhav)

Mumbai: A fire broke out on the 22nd floor of the Air India building at Nariman Point on Tuesday morning due to a short circuit in a central processing unit (CPU) in one of the two waiting rooms on the floor.

Three on-duty fire officials rushed to the floor after the building’s fire alarm rang out from the fire control room on the ground floor. No casualty was reported but, officials had to shift paintings and antiques to the lower floors as wooden furniture in the waiting room and reception area on the said floor was damaged. Incidentally, the office of Air India’s chairman and managing director (CMD) Ashwani Lohani is situated on the floor, along with those of senior airlines officials.

Though Air India’s fire officers contacted the fire brigade at 6.40 am, two of the three officials rushed to the ground floor in order to get the fire officials and get them at the spot.

The officers, who shut down six lifts, of which the third one is known as fire lift, had to take the stairs to reach the 22nd floor and every time they needed to coordinate. The building has a total of eleven fire fighting systems and every floor has two fire hydrants. The airline officials, however, had to shift twenty-five objects to the lower floors. Though power was restored in the building by 12.30 pm on Thursday, the 22nd floor remains without electricity.

Mr Lohani was scheduled to make his routine visit to Mumbai and hence was at the spot by 1.30pm. J.B. Singh, assistant manager (security) and fire officer of Air India, said, "The fire was restricted to the waiting room and the reception area, but was not under our control since we had no mask and hence couldn't enter the affected area. The cooling procedure concluded by around 11 am and after the smoke started leaving the floor, we shifted our paintings and objects on the lower floor. The CMD cabin and all other staffers' areas were unaffected."

The CMD's cabin has the table that is an antique and belongs to J.R.D. Tata. "The uniqueness and amount of the table cannot be expressed and we are happy that the entire CMD's cabin remained unaffected," Mr Singh said.

Chief fire officer P.S. Ranhangdale said, “The fire was restricted to particular area which was a good sign for us. However, high-rise buildings are always a challenge as there are various issues like ventilation problem that is faced. Further investigation for the cause of the fire is in process.”