According to a Bombay high court order, these Victorias were to disappear from the city’s streets from June this year. 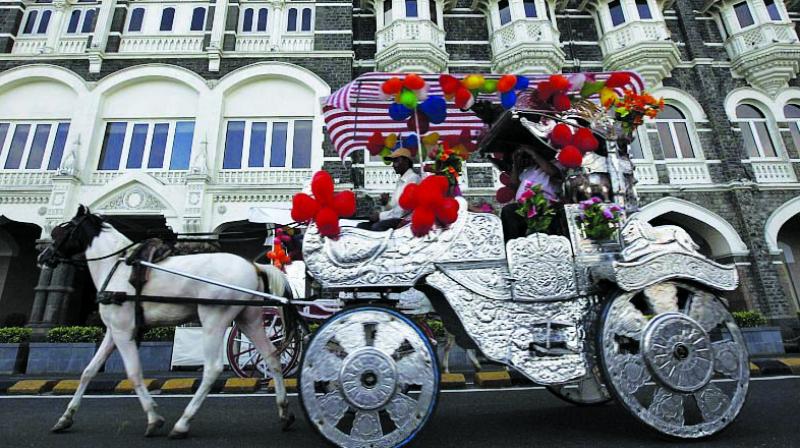 File image of a Victoria horse carriage at Churchgate.

Mumbai: The drivers of Victoria horse carriages would soon be given the option to drive cars for Ola or Uber instead for their livelihood, in an effort to rid the city of Victoria carriages.

According to a Bombay high court order, these Victorias were to disappear from the city’s streets from June this year. But one can still find them on the roads since the government hasn’t yet made any proper settlement options available for the carriage drivers.

However, a committee under the chairmanship of finance minister Sudhir Mungantiwar, along with NGOs, minister Mahadev Jankar and others, has now come up with several options to rehabilitate the horsemen.

Offering one of the options at the committee meeting,  it was observed that horses can be purchased from the owners by the People for Animals  (PFA) foundation or any other NGO at the prevailing market value, and can be given to the animal husbandry or tourism department of Maharashtra."

A senior member of Mr Mungantiwar's ministry said, "Another option suggested by the minister for rehabilitating the horse carriage drivers was issuing them with hawkers' licences, which would be issued after a survey as per the relevant Act (this would take eight months). Another option was providing financial settlement of around `2 lakh to each affected driver's family. Finally, it was also suggested that the Victoria drivers be given financial assistance to buy a cab for Ola or Uber services after the state finalises a new law for online taxi aggregators."

Ambika Hirnanandani from People for Animals, the NGO that has been spearheading this case, said, "There are many horse carriage drivers who have no issues leaving this business, provided they are given a better package. The minister’s suggestions are good. We are ready to take the animals in and many horse carriage drivers are ready to accept the options given to them. But the minister would have a direct meeting with the drivers to make them understand the options available for their rehabilitation.”