Protestors demand govt promulgate an ordinance, like one for Jallikattu. 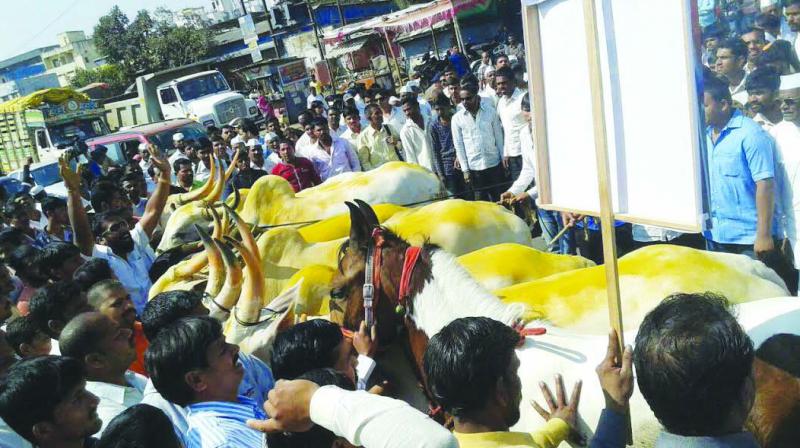 Pune: Following the footsteps of thousands of Tamil people who agitated for lifting of the ban on Jallikattu, over 3,000 bullock cart race enthusiasts from across Maharashtra on Saturday protested at Chakan on the Pune-Nashik highway for lifting of the ban on these races. The protesters demanded that the Maharashtra government come out with an ordinance like that of Tamil Nadu, allowing bullock cart races to be held in the state. From 10.30am to 1pm, Chakan resembled a sea of humanity holding placards that said, “Save culture, save bulls and races…”

Bullock cart races are to Maharashtra what Jallikattu is to Tamil Nadu with the tradition dating back 250 to 300 years. Races are held across Maharashtra, especially in Khed, Chakan, Ambegaon and tehsils of Pune district. They form a staple at village fairs between January-February and beginning of the monsoon when there is a lull in farming activity after the Rabi season. Thousands of aficionados enjoy the game and entertainment taxes are also paid, according to organisers.

In 2011 however, bulls were included in the list of performing animals under the Prevention of Animal Cruelty Act, 1960, and the year after, the Maharashtra government by a government resolution (GR) banned bullock cart races in the state. Notwithstanding, many organisations appealed the Supreme Court which stayed the government decision and allowed organisers to conduct races. Hence, races were held in 2013 and 2014 only to be banned once again in 2014 by the apex court.

Ramkrushana Takalkar, president of the Maharashtra Bailgadi Chalak Malak organisation, has filed a petition with the Supreme Court asking for the ban to be lifted. “We are proud that people in Tamil Nadu protested for three to four days to save Tamil pride. Now it is time for people in Maharashtra to fight for Marathi pride and demand that the ban on bullock cart races be lifted. Like Tamil Nadu, Maharashtra government should come up with an ordinance allowing the races to be held,” he said.