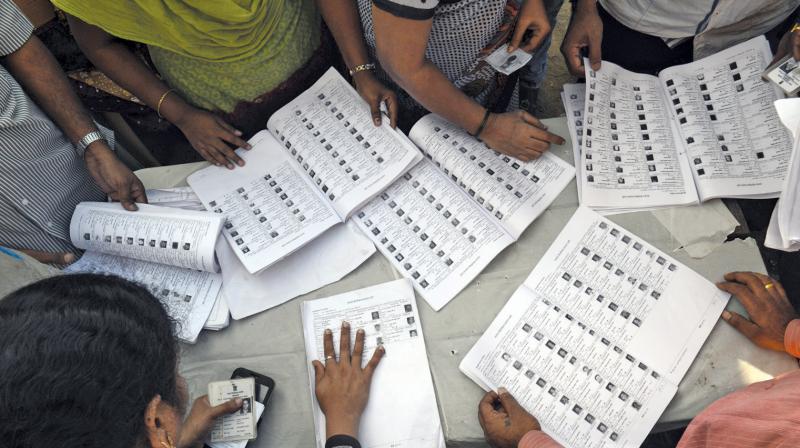 Dharavi residents look for their names in the voters’ list at a polling booth during the Mumbai civic polls. (Photo: Rajesh Jadhav)

Mumbai: As Mumbai went to the polls on Tuesday, the elections highlighted woes of scores of voters. While Mumbai has recorded a voting percentage of 55 per cent, the voter turn-out is estimated to be much higher. All voters who turned up at polling stations could not vote, owning to missing names from the list. Voters in Bandra, Kurla, Mankhurd, Govandi, Dharavi, Sion Koliwada, Dahisar, Vile Parle, Jogeshwari, Andheri and Worli complained of not being able to find their names in the voter lists.

J.S. Saharia, State Election Commissioner, said he would look into the matter but also blamed voters who did not check the list on time. “We have had awareness campaigns for the voters to check if their names were included in the list,” Mr Saharia said.

When The Asian Age contacted a BMC official, he said, “This is the election commission’s (EC) department. The BMC puts out lists directly received from the EC. However, the EC started advertising about the polls in August 2016. Voters were told they would not be able to vote if their names are not there in the January 2017 voter list. If citizens were more responsible, this commotion would not have occurred.”

Dharavi names missing too
Around 12 pm, an exasperated Jiramani Babbanraam (65) gave up finding her name in voters’ list at ward no 185, Lal Chawl, Dharavi. She sat on road and vented against the Election Commission. “I have been voting here for the last 25 years. Why is my name missing this time?” she angrily asked a worker at the booth. When the police at centre asked her to find her name at another booth in same ward, she said she had already done that. “I checked in three places. Now should I go back without voting?” she asked. At Sion Koliwada ward number 172, citizens were waiting in the line for almost an hour. Sushila Shelar (62) angrily reacted. “Why has the EC not arranged for more than one machine at such places?” she said. In Dharavi ward number 185, there were many people who couldn’t find their names in the list. Even political activists were astonished to know that regular voters’ names were not in the list. MNS activist Sanjay Waghole said, “Those who regularly cast their vote are missing in the lists. Such a thing is happening for the first time in our area.”

Dahisar denizens disheartened
The Brihanmumbai Municipal Corporation (BMC) polls on Tuesday saw a huge number of first-time voters coming out to vote in the western suburbs of North Mumbai like Dahisar, Borivali, Kandivali and Malad. However, many were left disheartened on learning their names were not included in the list.

Ramesh Gupta, a senior citizen from Ganpat Patil Nagar in Dahisar, said, “The names of our whole family did not find any mention in the list despite us being voters from this particular area since 2002.”

A first-time voter, Sakshi Maurya, said, “I had made my voter identity card within the prescribed deadline of the election commission and was informed that my name would be added in the list. But today when I came to polling booth I was informed that my name is not included in the list.”Similarly in areas like Malwani and Evershine Nagar in Malad many did not find their names in the list and were seen checking in several polling booths for their names. Pravin Shah, BJP candidate from Borivali alleged that the missing names goof up was deliberately created by the administration. Despite fresh applicants applying, their names were not added, he alleged.

Kurla residents left high, dry
Voters of Kurla, Vidya Vihar, Mankhurd and Govandi, who ventured out of their homes in the morning, hoping to get back within an hour, were seen running pillar to post to either find their names in the voters’ list or find polling booths on Tuesday. Such people mostly had decade-old voter identity cards and had exercised their franchise earlier.

Some voters even had voting slips, with details of respective polling booths, but on approaching the polling booth, their names were missing. People with voter identity cards eventually gave up, fed up with having to locate the right polling booth, and went home. Mohammah Umar, an angry Kurla resident, alleged, “This is a political conspiracy.

Our votes are lost, even though we wanted to contribute to the development of our wards. We were responsible and registered ourselves for the elections, but why didn’t our names appear?” While block officers were simply missing for response, returning officers of respective wards told people to simply go home owing to their lack of a solution to their problems.

Cops record single unruly incident
In the only incident of unruly behaviour recorded in the city, a mob of over 40 people demanded that the police shut down a polling booth in Mankhurd near Beat chowki 2. The voters were enraged that their names were missing from the voters’ list. The voters alleged that they waited for over three hours but found no help from the duty officers in locating their name in the list. Mankhurd resident

Mukesh Gupta said that they had received receipts containing details of their voter identification card including the polling booth number. He said, “Our names and details are on the receipts. But when we go to the polling booth, our name is not on the list. How is this possible?” When voters realised that many of them were facing the same problem, they approached the police and started arguing with the officers at the station. The policemen soon formed a human chain when the mob threatened to enter the beat chowki. “This is the fault of the civic body. We have no role to play in the voter list and only need to look at the security,” said a police officer on condition of anonymity.

Speaking about the misdemeanours that took place during polling, Ashok Dudhe, Mumbai police spokesperson, said, “14 NCs were registered for minor reasons. One cognisable offence was registered at Antop Hill for obstructing a government officer from discharging his duty. There wasn’t any serious untoward incident in the city.”

Worli sees similar issues, voters vent
Around 50 residents of Worli’s Mayanagar area, who learned that their names were not on the voters’s list, entered the centre but were asked to leave. The outraged residents created a ruckus at Mayanagar’s polling booth no 196/3.

Resident Rehman Munshi  (43) said he had been voting for the past two decades. “It is sheer stupidity on the part of the Brihanmumbai Municipal Corporation to deprive our rights. It has been done deliberately.”

Another voter, homemakar Sajida Ansari (56) told this paper,  “I am not being allowed to vote despite being a resident. I’ve come here four times now but the officer inside the booth says I can’t vote since my name is not on the last.”

Another angry resident, Randive Sachin (36), said, “I was being prevented from voting. My name is not mentioned in the voters’ list, but it is displayed on the website.”

On the other hand, zonal officer Ashok Gupta,  washing his hands of the unpleasantness, said, “The list was forwarded to us from the BMC headquarters and we have no clue about this why this has happened.”

Bandra sees wild goose chase
Eric D’Souza (65), a resident of Bandra (west), had to run from pillar to post to find his name on the voters’ list and after a visit to the returning officer gave him the wrong polling booth he had almost given up and decided to go home. “Had it not been for a polling agent making the extra effort to trace my name after which I managed cast my vote at booth number 26 of ward 102, I would have gone home,” said Mr D’Souza.

However Manoj Bade (48), a Bandra Reclamation resident, called off his efforts after his name did not feature at the regular polling booth list. “I searched my name in adjoining polling booths but could not find it either in the voters’ list at MET nor IES School after which I decided not to cast my vote. I think it is a ploy of the authorities to discourage voters from voting,” said Mr Bade.

Online mistakes another issue
Channelling the spirit of Digital India, many voters availed of online facilities to get information about their polling station; but unfortunately for some of them the websites turned out to have inaccurate details. Dongri resident Mohammad Arafat Padaya (34) said, “I preferred getting information online rather than going to people sitting with printouts of the list to save time, but it turned out to be a bad experience because when I reached Derawani Jain High School, the address mentioned on website, the centre was shut and ultimately I went up to check the list physically and found my name in Katchchi Memon Jamat Khana in Dongri,” said Mr Padaya, who was going to the new polling booth to cast his vote. “What is the use of a facility if it is not working properly and making people suffer?” he added.

Senior citizen disappointed
Sharayu Bicchu, a senior citizen from MIG Colony, Bandra (east) who says she has been voting since the last 50 years, was shocked when she was told her name was absent from the voters’ list.

Ms Bicchu and her son Girish had searched three other booths for an hour before finally decided to go at home. Other residents from the same locality approached election officer Prashant Gaikwad who assured them of help, but eventually he also admitted that many names had been deleted.

Kalyani Jani, a resident from the locality told The Asian Age the names of 150 residents of 19 buildings that are undergoing redevelopment were deleted from the voters’ list. The locals demanded that they should be allowed to vote on the basis of their Aadhaar cards, but their plea was denied.

Andheri Sports Complex complications
While Vile Parle, Andheri and Jogeshwari saw a good amount of people coming to vote, Andheri Sports Complex residents created ruckus in front of the returning officer. The residents claimed more than 60 per cent of those living in seven societies in the area did not get to vote due to their name not being included in the list. Charulata Chakravarty (53), a resident of Shahkar Nagar in Andheri (east), was upset that she couldn’t vote. The otherwise regular voter said, “My son and daughter, who stay away from me were on the list but I didn’t get my slip. When I enquired at the booth, I was directed to go to the office and register my complaint.” Ms Chakravarty also said she wanted to take this matter up with the authority in order to avoid this situation for the next election. Manilal Shah, a resident of Azad Nagar in Andheri (west), said he was staying in Andheri for thirty years and had never faced such issues before. He said, “They told me that they had the same list as that of the Vidhan Sabha elections in spite of which my name was missing. They told me to attentive and register myself three months prior to the elections. I have been vote regularly so how would I know it was not there this time?”