All the six accused were working with companies belonging to prime accused Nirav Modi and Mehul Choksi. 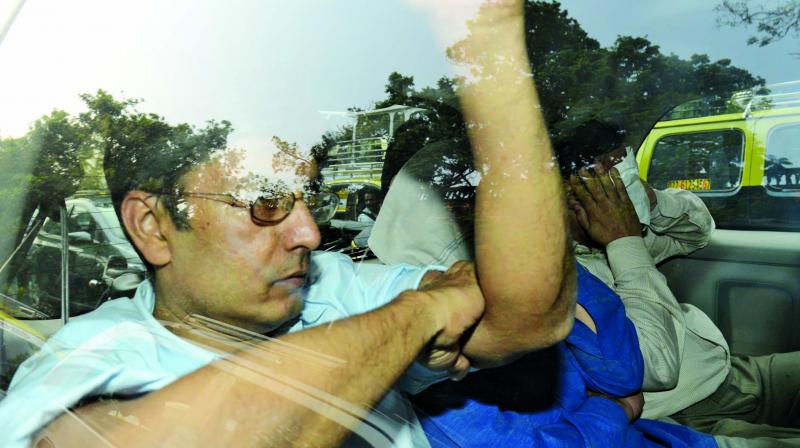 Vipul Ambani, the president of investor relations and corporate affairs of Nirav Modi’s firm, was produced in the court on Wednesday (Photo: Rajesh Jadhav)

Mumbai: A special CBI court on Wednesday remanded six accused in PNB-Nirav Modi fraud case including Vipul Ambani to CBI custody till March 5. All the six accused were working with companies belonging to prime accused Nirav Modi and Mehul Choksi.

According to the CBI, Ambani, the president of investor relations and corporate affairs of Nirav Modi’s firm, was in touch with the officials of PNB branch at Brady House, Circle and Zonal office at Mumbai and the head office in New Delhi.

The CBI counsel A. Limosin argued before special judge S.R. Tamboli that on Wednesday during the raids on the office of Firestar Group of companies at Lower Parel, the applications of fraudulent Letters of Understanding (LoUs) made to PNB, by the three firms of Modi — Diamond ‘R’US, Solar Exports and Stellar Diamonds — have been seized. The CBI has said that this these documents and circumstances prove he had knowledge of the fraudulent applications for LoUs.

Advocate Limosin said that Kavita Mankikar, an executive assistant to Modi, was authorised signatory of M/s Diamonds ‘R’US, M/s Stellar Diamonds and M/s Solar Exports and she had signed the fraudulent LoUs to PNB for the issuance of buyers credit.

Mankikar’s lawyer Vijay Agarwal had argued that she was arrested after sunset in violation of the law and hence this court does not have jurisdiction to grant her police custody. He had also argued that she has already given details to CBI whatever knowledge she has about the transactions and if she is granted CBI custody, she would be subjected to torture, and hence she should not be remanded to CBI custody. The judge however remanded all the accused to thirteen days custody.