Ministers say they will fulfil demands within 3 months. 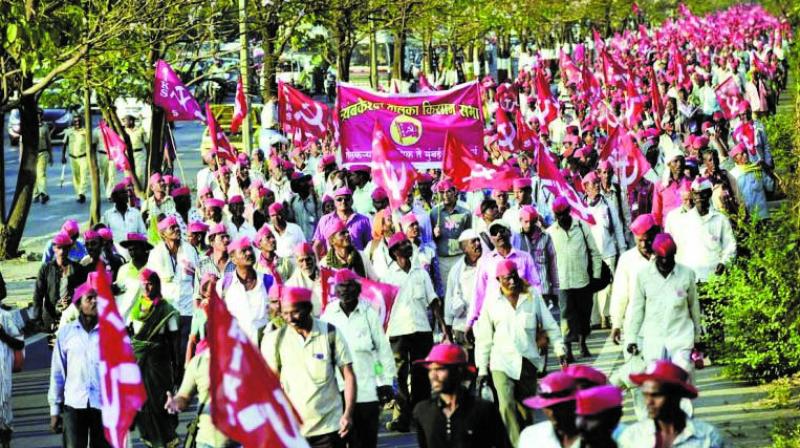 The march is a repeat of last year’s ‘Long March’.

Mumbai: Following the assurance of state ministers to look into their demands, the agitating farmers called off their strike on late Thursday evening at Nashik.

Water resources minister Girish Mahajan and tourism minister Jaykumar Rawal held talks with the farmers and promised them that all their demands would be fulfilled within three months.

“The talks were positive. We assured the farmers that we would apprise the chief minister about their demands and will try to fulfil them in a period of three months,” said Mr Mahajan.

Thousands of farmers from 23 districts across the state were expected to reach Mumbai on February 27, when the State Assembly Session will be under way. They had began marching to the state capital in a repeat of last year’s ‘Long March’. The 180-km protest march was organised by the All India Kisan Sabha (AIKS), affiliated to the Communist Party of India (Marxist) (CPM).

Farmers have demanded a blanket loan waiver from the state government. They also want waters of the west flowing rivers to be diverted towards Marathwada and north Maharashtra so that farmlands in their region come under irrigation. Other demands include implementation of recommendations of Swaminathan Commission and the transfer of forestland to the farmers who are cultivating on it.

The Kisan Long March led by Dr Ajit Nawale was also organised last year in March during the budget session. The All India Kisan Sabha claimed the state government has not fulfilled its promises to farmers after the protest march last year.

Mr Navale said, “We are feeling betrayed by the state. A year has passed, but the state is yet to fulfil its promises. Hence the march is being held.”