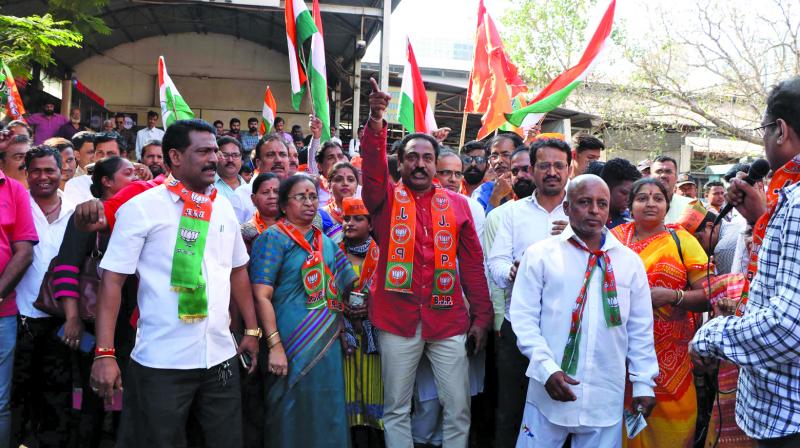 Mumbai: A huge political storm has erupted over former All Indian Majlis-e-Ittehadul Muslimeen (AIMIM) legislator Waris Pathan’s comment at an anti-CAA protest in Kalburgi on February 15. He reportedly said that “15 crore (Muslims) will prove stronger than the 100-crore majority”.

The Bharatiya Janata Party (BJP) on Friday held a protest in the Byculla Assembly constituency, which Mr Pathan represented, while Maharash-tra Navnirman Sena (MNS) leader Bala Nandg-aonkar has issued an open threat to him. However, the AIMIM leader claimed that he was quoted out of context.

The BJP protest march from Byculla railway station to the local police station was led by the party’s south Mumbai chief Sharad Chintankar and Colaba MLA Rahul Narvekar. Mr Chintankar said the party submitted a memorandum to the police demanding registration of an FIR against Mr Pathan. The BJP also protested in Gulmandi area in Aurangabad and burnt an effigy of Pathan.

Meanwhile, a party leader in Aurangabad on Friday said that the AIMIM would seek explanation from Mr Pathan over his alleged controversial remark. AIMIM’s Maharashtra unit chief and Aurangabad MP Imtiyaz Jaleel said, “Our party does not support the statement made by Waris Pathan. The party will seek an explanation from him over the remarks.”

The Raj Thackeray-led Maharashtra Navnirman Sena (MNS) also held protests in Aurangabad against Pathan, seeking stern action against him. The MNS took out a symbolic funeral procession of Pathan and raised slogans against the AIMIM. “The language of Waris Pathan was disgusting. He should be banned from giving public speeches in the state and also be arrested,” MNS leader Prakash Mahajan said.

Former Maharashtra chief minister and senior BJP leader Devendra Fadnavis on Friday demanded an apology from Pathan. He condemned AIMIM leader’s remarks and asked the latter not to mistake the majority community’s tolerance for weakness.

“We condemn the statement made by Waris Pat-han and demand an apology. In case he does not apologise, the state government must take action against him,” he said.

Talking about the incident, Shiv Sena leader Sanjay Raut on Friday accused the AIMIM of repeatedly misleading Indian Muslims and trying to poison their minds.

NCP spokesman and Maharashtra minority affairs minister Nawab Malik too condemned the remark. “We condemn Pathan’s divisive and inflammatory comments. Is there a fixed match between AIMIM and BJP for making communal remarks?” he said.