They will not be able to attend the proceedings of the house till December 31, if the action against them is not revoked. 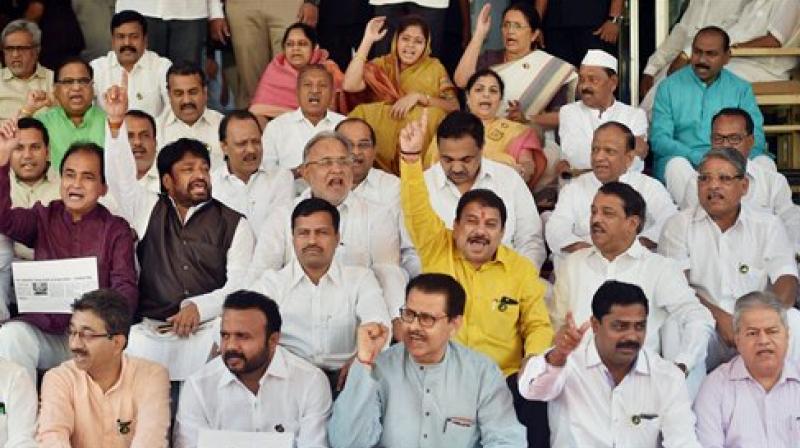 Opposition members protesting against the BJP government on farmer's issues during the Maharashtra Assembly Budget session in Mumbai. (Photo: AP)

Mumbai: Nineteen MLAs of the opposition Congress and the NCP were on Wednesday suspended from the Maharashtra Assembly for nine months for creating a ruckus during the Budget presentation in the House last week.

Nine of the legislators are from the Congress and 10 belong to the NCP.

They will not be able to attend the proceedings of the house till December 31, if the action against them is not revoked.

A resolution moved by Parliamentary Affairs Minister Girish Bapat seeking suspension of the MLAs was adopted by the house, where the ruling BJP and Shiv Sena have a majority.

Bapat said the Opposition MLAs had conducted themselves in a "disgraceful and unconstitutional manner".

Their suspension was being sought for displaying banners, playing cymbals, shouting slogans and disrespecting the Speaker's directions, he added.

The Opposition disrupted the Budget presentation by Finance Minister Sudhir Mungantiwar in the Assembly on March 18, demanding that the BJP-led government give an assurance on farm loan waiver.

Reacting to the development, Leader of the Opposition Radhakrishna Vikhe Patil (Congress) said the Opposition would boycott proceedings till the suspension was revoked.

Opposition leader in the Legislative Council, Dhananjay Munde, dubbed the suspension of the MLAs as a "murder of democracy".

The farm loan waiver issue rocked the Council as well as the Opposition members kept up their protest, leading to the adjournment of the house for the day.

The farm loan waiver issue has been dominating the Assembly ever since the Budget session began a fortnight ago.

The Opposition wanted urgent relief for cultivators hit by drought, which, they said, resulted in an increase in farmer suicides in the last few years.