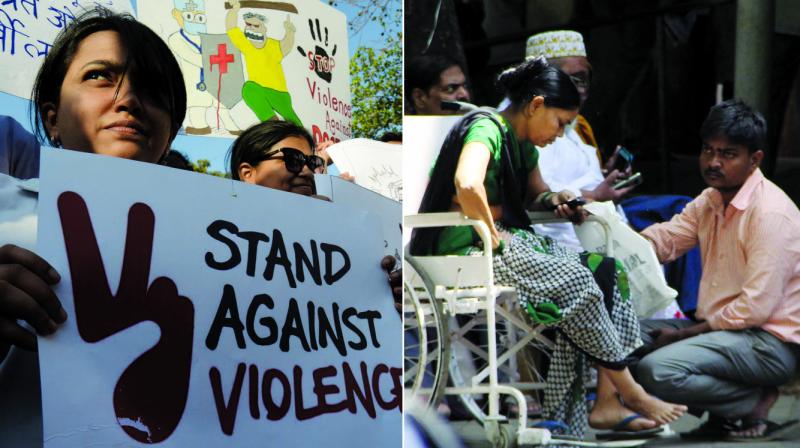 Resident doctors in Maharashtra’s government hospitals abstained from duty on Tuesday to protest at Azad Maidan attacks on their colleagues; A patient waits outside a hospital on Tuesday. (Photo: Rajesh Jadhav)

Mumbai: The Bombay high court on Tuesday come down heavily on resident doctors of government hospitals in Maharashtra for abstaining from duty and observed that their conduct was “shameful”. Over 4,000 resident doctors in the government hospitals of the state have been staying away from work since Monday to protest against the recent attacks by relatives of patients on their colleagues. The doctors are demanding better security for them at the hospitals.

On Monday, activist Afak Mandaviya through his advocate Dutta Mane told the HC that despite giving an undertaken to the HC, nearly 4,000 resident doctors remained absent, causing inconvenience to the patients and their kin.

On Tuesday, Chief Justice Manjulla Chellur was irked when Maharashtra association of resident doctor (MARD) lawyer Prashant Phopale told that the association had never called for a strike. Mr Phopale  said the resident doctors were abstaining from work in their individual capacity. The HC said, “If doctors say that they will not resume their duty till demands aren’t accepted, it’s a shame on the profession. If you doctors do not want to work then resign. You are not ordinary factory workers that you will go on strike.”

Mr Mane told the court that MARD had submitted undertaking stating that in future they will not go on strike or abstain from doing work or will not go on mass leave. It also assured that they will resolve its disputes in a peaceful manner. Mr Mane told the court that last year another bench of high court had set up a grievances redressal committee under the chairmanship of V.C. Daga retired justice of HC.

But MARD had not gone before that committee and directly went on strike.

“If that is the case, then the protesting doctors have committed contempt. The concerned hospital management should initiate action against them,” the HC said.

The court said that if doctors want to continue protest then they should be 100-feet away from hospitals and let patients enter and get treated. The HC has posted the petition for hearing on Wednesday. The HC directed MARD to file an affidavit stating that the protest was not called by it and clarifying its stand on the issue.