The sculpture has been restored by conservation architect Vikas Dilwari. 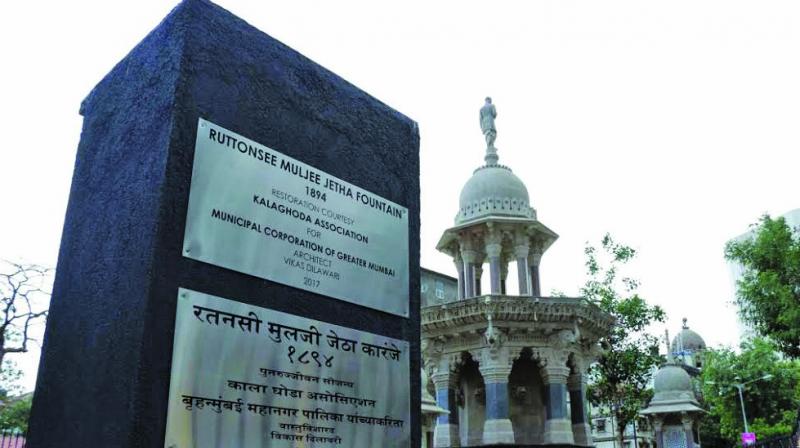 A picture of the restored Ruttonsee Memorial Fountain.

Civic officials said the fountain, located at the junction of P D’Mello Road and Mint Road, is built of stone in the Indo-saracenic style created by the British in a bid to merge British and Indian sensibilities. It was built by a merchant Ruttonsee Mulji Esquire in honour of his late and only son, Dharamsee (15), whose statue crowns the structure. It was presented to BMC on January 8, 1894, and was designed by well-known 19th century architect F.W. Stevens and sculpted by John Griffiths, head of Sir J.J. School of Arts.

The sculpture has been restored by conservation architect Vikas Dilwari. “When it comes to looking after monuments and fountains, people used to keep painting them earlier. We removed the paint with the help of a machine imported from Italy and also restored missing pieces in the stone. It took a lot of research to find its sink and pipe sources and activate them. We have also  improved surroundings by creating a small landscape,” he said.

Padmanabh Thombare from Kala Ghoda Association said, “Restoration of the fountain was part of our efforts toward conserving heritage monuments in the city. Earlier, we have restored iconic heritage sites such as the Kala Ghoda statue, Wadia clock tower, Horniman Circle garden etc.”