Over 100 activists of the Watchdog Foundation, an NGO working on civic issues expressed support to Mendonsa. 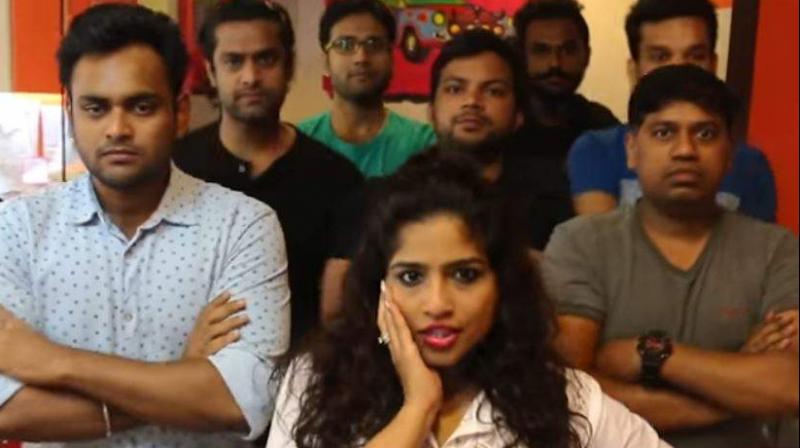 After the video, 'Mumbai tula BMC var bharosa nahi ka' (Mumbai, don't you trust BMC?) was released, the Sena corporators had demanded that the BMC file a defamation suit against Mendonsa. (Photo: YouTube)

Mumbai: Radio Jockey Malishka Mendonsa, facing the ire of the Shiv Sena for her music video mocking 'ill-preparedness' for monsoon of the party-ruled Brihanmumbai
Municipal Corporation (BMC), is receiving support from various sections of the society.

Over 100 activists of the Watchdog Foundation, an NGO working on civic issues, on Saturday assembled at Marol in suburban Andheri and expressed support to Mendonsa while highlighting the potholes issue in the city. Various bodies like 'Save Our Land', 'The Bombay East Association', besides many activists, joined the gathering.

Activists of the MMR (Mumbai Metropolitan Region) unit of the Aam Aadmi Party gathered at Azad Maidan in south Mumbai to show solidarity and criticised the BMC for "targetting the messengers".

"There are hundreds of illegal buildings coming up in each municipal ward and everywhere, but civic body babus are siting idle on it. While Malishka raised her voice through a song, the BMC officers showed 'extra-ordinary response' and slapped a notice on her.

"This is a crystal clear case of victimisation and we are here to support her (Mendonsa) at any cost, including fighting case for her in high court and supreme court," said
activist Godfrey Pimmenta.

Pimmenta was referring to a notice issued by the civic body to Mendonsa's mother for dengue breeding at her house in suburban Bandra, after the video became viral on social media.

Ashutosh Senger, Co-Incharge of the AAP's MMR unit, said they were against the pressure tactics of ruling parties.

"We vehemently opposes the pressure tactics, hooliganism and complete goondaism with complete impunity of the ruling political parties in the BMC. We all must unite to
rue this act of targeting the messengers," he said.

Activist Dolphy Desouza tweeted: "Instead of taking corrective measures, the BMC is shooting the messenger".

Meanwhile, hashtags like 'Mumbai with Malishka, I support RJ Malishka' and 'Pothole rap' continued to trend on the social-networking website.

In his 10-second video, Gandhi said, "Yes, I don't have faith in BMC. I support the Malishka for telling the truth".

For its part, the BMC has clarified that the notice sent to the RJ's Bandra home was a part of their routine inspection process and that the civic body doesn't believe in revengeful acts.

After the video, 'Mumbai tula BMC var bharosa nahi ka' (Mumbai, don't you trust BMC?) was released, the Sena corporators had demanded that the BMC file a defamation suit
against Mendonsa and the local FM channel for allegedly making fun of the civic body.