Metros   Mumbai  22 Jul 2017  Board this train to know more about science
Metros, Mumbai

Board this train to know more about science

The only glitch in all of this was the rushed manner in which they were taken through the whole process. 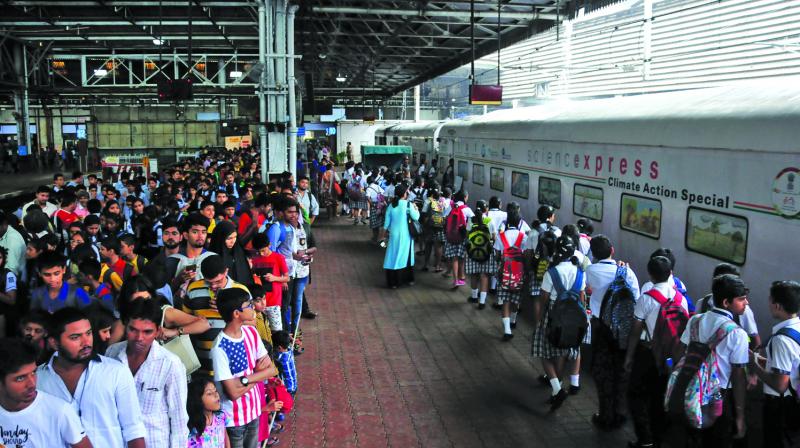 Science Express is stationed at CST’s platform No 10.

Mumbai: Busy commuters hustling to catch their local on time were greeted by an unusual sight at CST station on Friday afternoon. As they saw throngs of students waiting in a queue to catch a glimpse of the Science Express stationed at CST’s platform No 10. Incessant rains did not deter the crowd of over 30,000 visitors, patiently waiting to see the exhibition-on-wheels. An innovative mobile science exhibition mounted on a 16-coach AC train, the Science Express has been travelling across India since October 2007.

Since then, it has made eight tours of the country, travelling about 1, 58,000 km and exhibiting at 512 locations, before making a stopover in the city for three days. In its third day – the exhibit has witnessed more than 50,000 visitors and the organisers are expecting a colossal turnout as they finally wrap up on Saturday and proceed to Nagpur for the next leg of their journey.

Holding a thermometer, a distraught looking earth greeted us in the first coach. The temperatures are rising, are you paying attention, asked the placard, setting the mood for the rest of the journey. Clad in uniforms with notebooks in their hands, the school children formed two parallel lines, as they carefully looked around the exhibiting coaches. While some took copious amount of notes, others were seen enjoying the colourful info graphics discussing climate change, sustainable living, restoring nature’s balance and more.

The only glitch in all of this was the rushed manner in which they were taken through the whole process.

But with the large number of students already waiting in queue, it was difficult to give them the convenience of watching the exhibition at ease.  Amalendu Maji, a volunteer assisting the kids says, “For the last three days, more than 50,000 students and the general public have visited the train, the train will be here till Saturday and
we are expecting 50,000 more.”