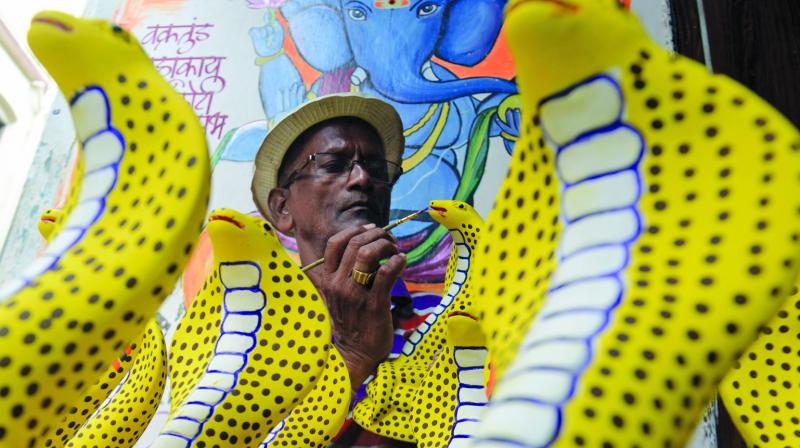 Mumbai: Days before the festival of Nagpanchami will be observed in the state on July 27, the Bombay high court on Friday dismissed a public interest litigation (PIL) opposing another PIL which has been filed seeking modification in an earlier high court order. The order in question had imposed a ban on catching live snakes for worshipping during Nagpanchami.

The HC however granted liberty to the petitioner, activist Pradeep Joshi, whose PIL it dismissed, to file an intervention application to oppose the PIL that sought modification of the HC order. Joshi had filed his petition through lawyer Ashish Pawar. Advocate Pawar argued before the court that the modification had been sought on grounds that a gazette of Sangli district published by the government of

Maharashtra in 1969 and one stone tablet located at Panhala fort dating back more than 250 years clearly mentioned that the state government had allotted land for the specific purpose of procession and competition of snakes.

According to the petitioner, the PIL seeking modification to worshipping live snakes on grounds of articles 24 and 25 claiming that these were ancient and traditional practices should not be allowed. The petition referred to ancient scriptures found on a stone and two books published in 1938 and 1921, which mentioned about the Gorakhnath temple and Nagpanchami festival.

Advocate Pawar argued before the division bench of chief justice Manjula Chellur and justice N.M. Jamdar that as per the Wildlife Protection Act, live snakes should not be hunted for worshipping and villagers should be allowed to worship statues. He also argued that the petition seeking permission to worship live snakes did not have any new merits, so it should be dismissed.

However, the bench held that the petitioner opposing hunting of snakes should intervene in the petition filed seeking permission to catch snakes, and disposed of it.