Mr Shinde met farmers from Jalana and Buldhana to placate them. 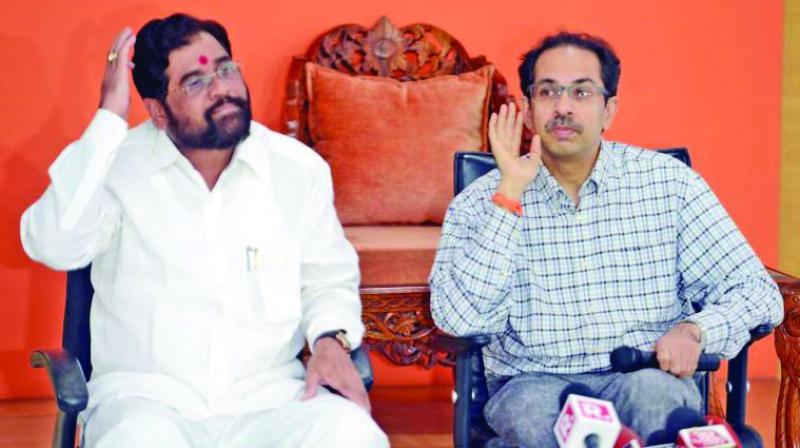 Shiv Sena has been opposing the project.

Mumbai: Maharashtra State Road Development Corporation (MSRDC) minister Ekanath Shinde continues to back the Mumbai-Nagpur Samruddhi Mahamarg Expressway Project, despite his party’s opposition. Sources had said that the Shiv Sena’s flip-flop over Samruddhi Mahamarg is damaging the party’s image on the ground.

Earlier, Mr Shinde was even present at cheque distribution programme for the farmers, whose land has been acquired for the project. Shiv Sena chief Uddhav Thackeray had claimed that there is no change in party’s line on the proposed expressway. Shiv Sena chief Uddhav Thackeray had said that fertile land would not be used for the Samruddhi Expressway project and that project affected people (PAP) will be given adequate compensation. Mr Shinde also said his party leadership never opposed the Nagpur-Mumbai Expressway project.

Despite repeated attempts by The Asian Age, Mr Shinde remained unavailable for comments.

A massive political fight has erupted over Samriddhi Mahamarg. The E-way will pass through nine districts of four regions in the state. Farmers have been opposing the proposed E-way. All political parties — excluding BJP — are supporting the farmers. NCP chief Sharad Pawar had united all farmer groups and held a rally in Aurangabad in June. Uddhav Thackeray too supported the farmers and held a rally in Nasik last week in May. Congress also waded into the political fight, holding protests in Vidarbha. Communist parties also held a protest in Shahapur and Thane in April.

Chief Minister Devendra Fadnavis claimed that Samruddhi Mahamarg would change the fortune of Vidarbha’s underdeveloped districts. “Many companies from Central Asia are interested in investing in Vidarbha and Marathwada. These are food processing companies. The value chains will be important to modernise agriculture and upgrade lives of farmers. Mumbai-Nagpur expressway would bring Vidarbha closer to Mumbai and other developed areas of the state, and it would help in speeding up the upgradation of farming,” said Mr Fadnavis. He was speaking at World Food India event organised by Union food processing ministry in Mumbai. “Samruddhi Mahamarg will connect 24 districts of the state. The expressway aims at minimising distance. We are working on a proposal to bring better connectivity,” he said further.