The state BJP is believed to have immediately gone into damage control mode to end any controversy arising out of their absence. 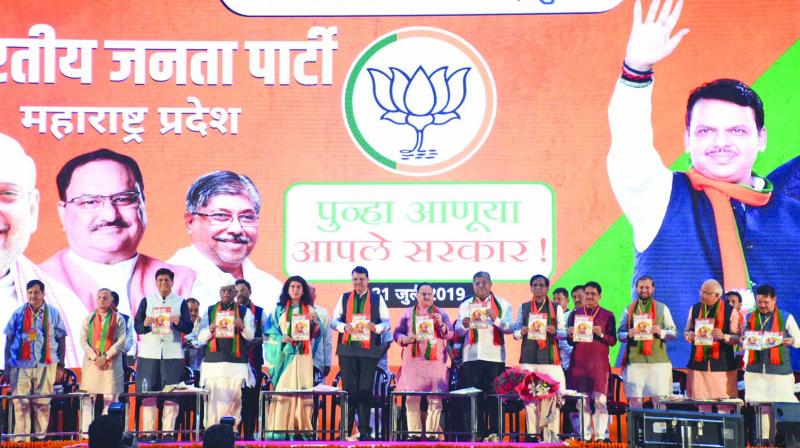 Chief minister Devendra Fadnavis and other senior BJP leaders at the executive committee meet on Sunday.

Mumbai: Noted Devendra Fadnavis baiters and senior BJP leaders Sudhir Mungantiwar, Nitin Gadkari and Pankaja Munde were conspicuous by their absence at the Maharashtra BJP’s executive committee meeting  on Sunday. Their absence at the meeting, which resolved to re-elect Mr Fadnavis as the state chief minister, however,  created an impression among party workers that all is not well in the party.

The state BJP is believed to have immediately gone into damage control mode to end any controversy arising out of their absence.

According to reports, state BJP chief Chandrakant Patil later spoke to them and ensured that Mr Mungantiwar reaches the venue of the meeting.

Mr Patil also issued a clarification over the matter. Blaming the television media for the unnecessary controversy, the state BJP president said, “TV media is reporting about Mr Mungantiwar’s absence. But he was suffering from very high fever from two-three days. Ideally, he should not have come. But since it was already decided that Mr Mungantiwar would propose the resolution, he attended the meeting. Now, TV media must show that he is present at the venue.”

Mr Patil also defended Ms Munde's absence from the meeting, arguing that she is currently abroad to help her son with his admission process.

He further added that Mr Gadkari could not attend the meeting due to some prior engagements.

It is worth noting that Mr Gadkari was a frontrunner for the chief minister's position after the BJP emerged as the single largest party in the 2014 polls.

However, the party’s national leadership ducked Mr. Gadkari and his loyalist Mr Mungantiwar to and picked Mr Fadnavis to run the state. Ms Munde, the eldest daughter of late former Union minister and deputy chief  minister Gopinath Munde and a prominent face of the backward community, was also denied the chief minister's position.