The probe report has said the civic body needs to take up the installation of an additional drain to prevent water logging at Hindmata. 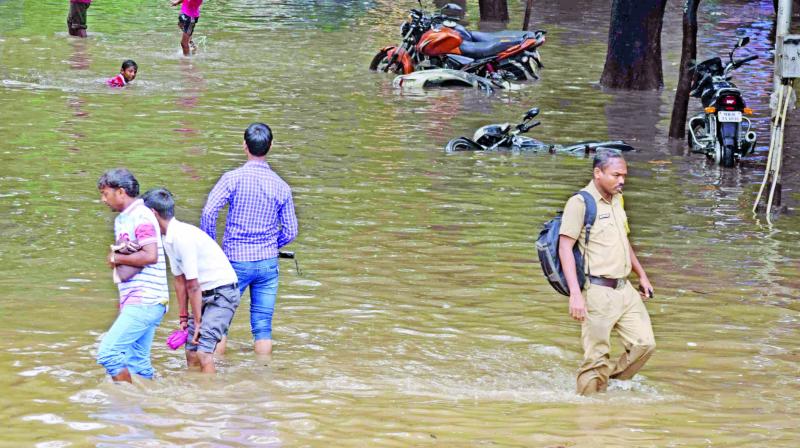 File picture of flooding at Hindmata.

Mumbai: The Brihanmumbai Municipal Corporation (BMC)’s probe report on the flooding at Hindmata has recommended the construction of a 7.5 km long additional drain upto the Britannia pumping station to ease the water logging problem.

After commissioning the Britannia pumping station at Reay Road last year, the BMC had promised that Hindmata, a notorious flooding spot, and its surrounding areas would not face water logging problems. But in the very first major rains in the city on June 12, the entire area went under water, raising question over BMC’s claims of being prepared for the monsoons.

BMC chief Ajoy Mehta had ordered an inquiry into the functioning of the Britannia pumping station and the reasons why the water accumulated at Hindmata and Gandhi Market took several hours to recede, even after commissioning the pumping station.

The probe report has said the civic body needs to take up the installation of an additional drain to prevent water logging at Hindmata. It should be built from Madkebuva Chowk via Lalbaug to Kalachowki, and then connected to ensure proper discharge of floodwater, says the report.

Commenting on it, Mr Mehta said the additional drain is required due to the peculiar topography of the area. “The level difference between Hindmata and Britannia pumping station is not much as there is very little slope. So the water is not brought quickly to the pumping station. Also, the underground network of utilities is very complex. So we will lay an additional drain under the footpath along the route,” he said.

According to civic officials, the Britannia pumping station can handle only 50 mm of rainfall in an hour. The capacity of present drains, which are underground and constitute 25 per cent of sewer lines, cannot be increased. Hence, additional drains are required to ease the flooding issue.