The chief minister said that the underground and elevated metro lines will be unaffected if floods occur. 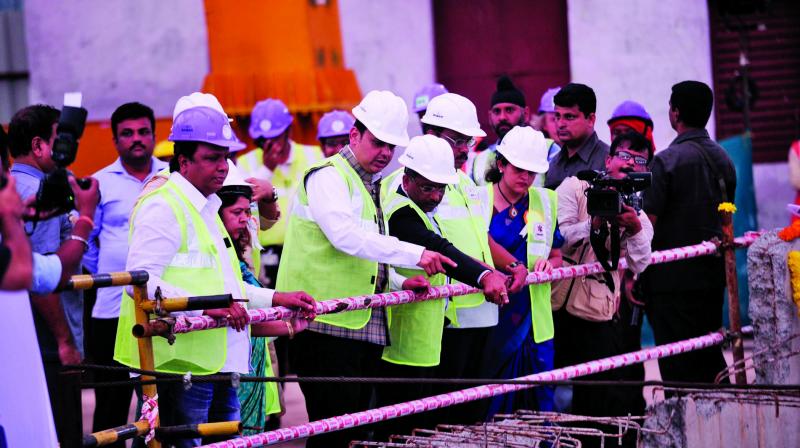 The chief minister at the lowering of the tunnel boring machine event. (Photo: Mrugesh Bandiwadekar)

Mumbai: Now say goodbye to long queues at stations, the state government has signed an MoU with Ford, for creating a single-ticketing app through which Mumbaikars can book tickets for all types of public transport — BEST bus, suburban railway, monorail, metro and water ways in a jiffy.

Speaking at a programme organised during the lowering of the tunnel boring machine (TBM) for the Metro-3 line at Nayanagar, Mahim, chief minister Devendra Fadnavis on Thursday said, “We signed the MoU with Ford two days ago for creating the integrated ticketing app. Through this single app, people can book tickets of BEST buses, suburban railways, monorail, elevated metro, underground metro, and water transport.”

The launch of the TBM happened at a time when the Bombay high court had last week stayed the tunneling work of Metro-3 line  for two weeks  near J.N. Petit Library at D.N. Road in south Mumbai. “The metro works is stopped only near the premises of J.N. Petit for two weeks. The work on other parts of D.N. Road is going on. The tunneling at Mahim is not affected with the HC stay,” said a MMRC official.

The chief minister said that the underground and elevated metro lines will be unaffected if floods occur. “Public transport will not be hampered,” Mr Fadnavis said.

On Thursday, the first TBM weighing 310 tonnes was lowered which will perform the tunneling of the 33.5 km Metro-3 corridor. The machine was lowered in the presence of Mr Fadnavis. The TBM lowered at Mahim will come outside at Dadar after two years. Mr Fadnavis mentioned that all the metro projects would be completed between 2021-22. “Currently the capacity of suburban railways is 70 lakh passengers. The Metro-3 will be able to take 90 lakh passengers. In the next 3-4 years when the elevated and underground metro is functional, the capacity of the public transport will jump to 1.30 crore,” he said.