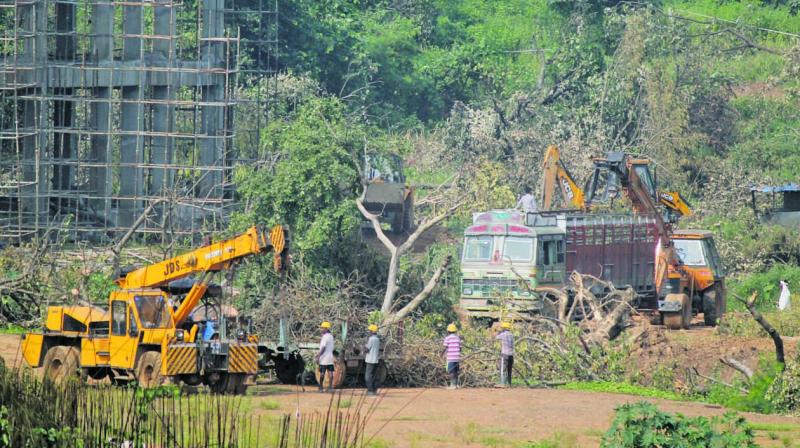 The court also asked that photos of trees and surviving trees that were planted two years ago be produced by way of an affidavit.

Mumbai: The Supreme Court on Monday asked the Mumbai Metro Rail Corporation Limited (MMRCL) to produce pictures of the tree felling in Aarey Colony in Goregaon as well as those of afforestation, transplantation, and measurement of girth and height of trees planted in the area by November 15.

The court also asked that photos of trees and surviving trees that were planted two years ago be produced by way of an affidavit. “It shall also be clearly stated in the affidavit as to what is the survival rate of the transplanted trees and how many have survived till date. Let the figures be stated,” it said.

The court also made it clear that there was no stay on the construction of the metro car shed and that its stay order was only limited to the felling of trees in the colony.

A special bench comprising Justice Arun Mishra and Deepak Gupta was hearing a suo motu PIL on the cutting of trees at Aarey Colony.

Rishav Ranjan, a law student and resident of Greater Noida, had written a letter to the Chief Justice of India on October 6, bringing to his notice the public outcry against the massive tree-cutting exercise at the colony. Mr Ranjan requested the court to intervene in the matter. The letter was then converted into a suo motu PIL and an urgent hearing was held. The court then stayed the cutting of trees until further orders, but by then the authorities had already cut more than 2,000 trees.

On Monday, solicitor general Tushar Mehta, who appeared on behalf of the Brihanmumbai Municipal Corporation (BMC), informed the court that tree cutting had been stopped after the Supreme Court order.

Dismissing claims that construction activities were underway at the site, senior advocate Mukul Rohatgi, who appeared on behalf of the MMRCL, said, “There are no building projects. These are absolutely false allegations. The only project is that of the metro car shed. He also assured the court that absolute status quo had been maintained and that no trees had been cut since the top court's previous order.

Defending the construction of the car shed project for the expansion of metro services in the city, Mr Rohatgi said seven lakh vehicles are off the roads in Delhi because of such services. It helps reduce air pollution, he said.

On October 4, the Bombay high court dismissed five petitions filled by NGOs and environmental activists challenging the felling of trees in Aarey Colony. The court in its order stated that another bench of the high court had already decided that Aarey was not a forest area.

The next day, an application for stay of the judgment was moved before the Bombay high court stating that the authorities were taking advantage of the holidays in the Supreme Court.