2 maintain innocence, arguments of 3rd yet to be heard. 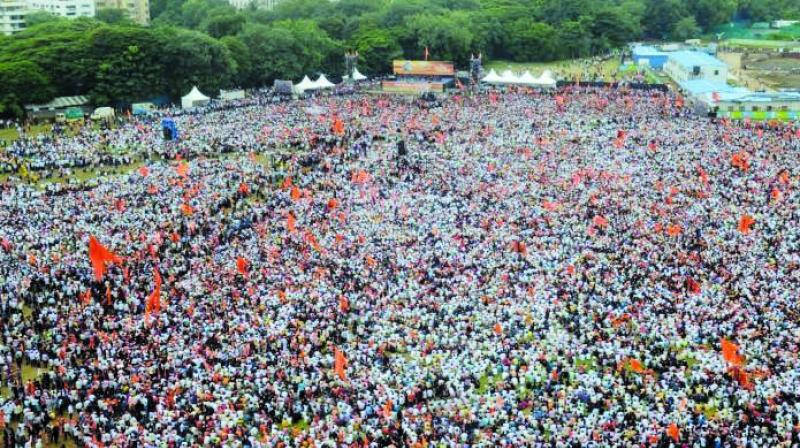 File photo of a morcha held by Marathas over the rape case, among other issues.

Mumbai: Arguments on the quantum of punishment for the three accused in the Kopardi rape and murder of a 15-year-old commenced on Tuesday at the sessions court in Ahmednagar. The counsel for Nitin Bhailume (28) sought lenient punishment on the grounds that it was the first time that he had committed a crime, the counsel for the main accused Jitendra Shinde (21) sought life imprisonment as it was not the rarest of rare case which merits the death penalty. Arguments of the third accused Santosh Bhaval (29) will be continued on Wednesday after which special public prosecutor Ujjwal Nikam will argue as to why the trio should be given maximum punishment.

The arguments on the quantum of punishment started at the sessions court presided by judge Suvarna Kevale at 11.15 am amidst heavy police bandobast as a large number of people from the Maratha community had turned up. Bhailume’s lawyer Prak-ash Aher argued that Bhailume was a final year B.Sc student and his parents were labourers. He was the only support of his parents and as he had no criminal record, the court should take it into consideration and show leniency towards him. When asked if he wanted to say anything, Bhailume said he was innocent.

Yohan Makasare, advocate for Shinde, said his client was not a notorious criminal. Mr Makasare argued that as Shinde’s wife and parents were dependent on him, he should get life imprisonment. On his part, Shinde denied the accusation of murder and said he was not the perpetrator and when asked about the quantum of punishment he said whether it was for a day or thousand days, it did not matter as it was a punishment.

The brutal incident that occurred on July 15, 2016 had sparked off a state-wide protest by the Maratha community. The protests were spearheaded by an organisation representing Maratha issues and had been held in numerous cities.

Timeline of the incident

July 13, 2016: A 15-year-old girl, who was returning home after meeting her grandfather in Kopardi, is gang-raped and assaulted. The assailants break her limbs before throttling her.
September 2016: The police arrests three Dalit youths, Jitendra Shinde, Santosh Bhaval and Nitin Bhailume, in connection with the crime
September 2016: The Maratha Kranti Morcha holds silent marches in various parts of the state demanding early completion of trial and punishment for the accused,  in addition to its demand for reservation for Marathas in the state
November 1, 2016: The police files an over-350-page chargesheet before the local sessions court.