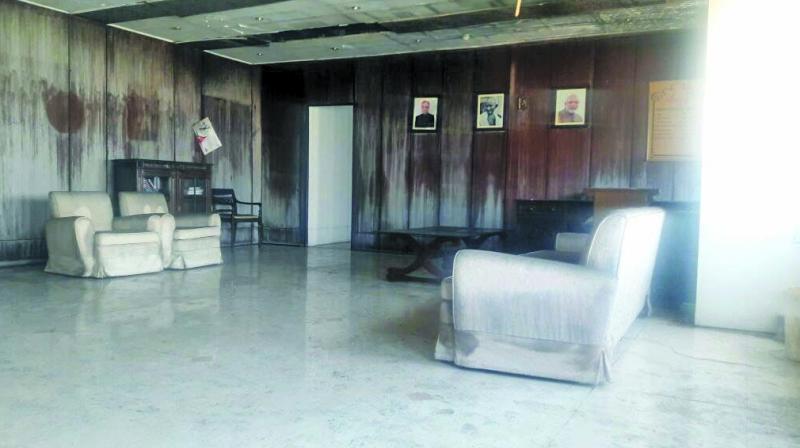 The 22nd floor cabin of AI chairman and managing director Ashwani Lohani, which is damp after being water-logged.

Mumbai: The Air India building consisting of several offices remained shut till Wednesday afternoon. According to senior officials, the reason for the building to remain shut was the remaining water that has been leaking from the ducts, which has travelled till the second floor of the building. Though the airline officials are still in the process of draining water on all the floors, the entire building will, however, be operational only by today.

The building was full of smoke when the 22nd floor had a short circuit in one of the central processing units of one of the two waiting rooms at the floor. Though there was no casualty, the high-rise building was waterl-logged, as the fire officials from both the Brihanmumbai Municipal Corporation as well as from the airline controlled the situation using water on Tuesday.

Sources from the airline explained, “Due to the water leakage from the 22nd floor to all its lower floors, it is difficult to restore the electricity. Though the process is on since morning, the 22nd and 23rd floor has been isolated from the power supply. However, the first floor has power supply.”

When the fire alarm rung, three fire officials on duty rushed to the floor and realised that the smoke let out from the said waiting room was unbearable. Though the fire offices of the national carrier tried to get the situation under control, they contacted the fire officials at 6.40am.

The building has a total of 11 fire fighting systems and each floor has two fire hydrants. The airline officials however had to shift 25 objects to their lower floors.

“Some of the employees were permitted to  go back to their respective floors in phases in the building,” said Dhananjay Kumar, an airline spokesperson.