Metros   Mumbai  23 Mar 2018  No fogging to be done in residential localities
Metros, Mumbai

No fogging to be done in residential localities

Due to health complaints, only bldg sites to see action. 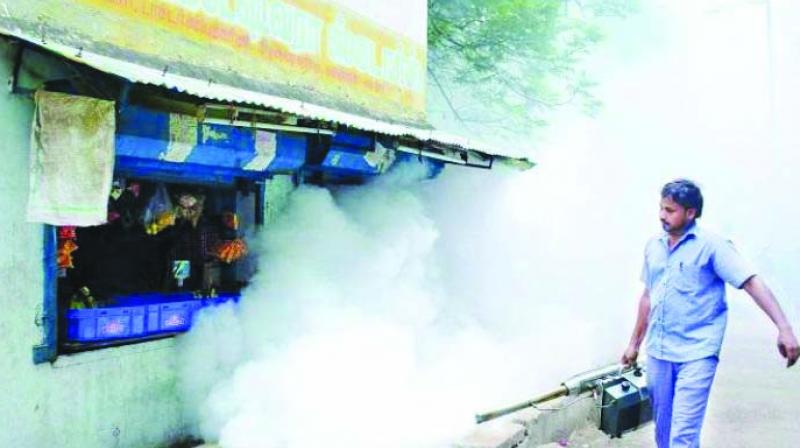 The on-going constructions sites are often seen to be breeding grounds for dengue mosquitoes.

Mumbai: The Brihanmumbai Municipal Corporation (BMC) has decided to reduce fogging activities in residential areas following complaints of health problems being caused due to it. Instead, fogging will now be carried out only at under-construction sites, which are considered as major mosquito breeding spots.

Every year, the civic insecticide department carries out fogging operations across the city with an aim to control vector-borne diseases. However, there have been complaints that residents are facing breathing problems due to the fogging in their areas. Civic chief Ajoy Mehta said, “The health department hassaid that fogging activities should be controlled as it leads to the rise of asthma and other diseases.

Hence, though they will not be stopped, they will be carried out on smaller scale. Strict measures will be taken to ensure that no water logging takes places to avoid mosquito breeding.

“We have decided to change our policy. So instead of carrying out fogging, we will try to reduce water logging spots in the city. For that, we have decided to act tough against people who are responsible for accumulation of water in their areas,” he added.

According to civic data, last year, the BMC had issued 17,839 notices for not taking proper measures to avoid mosquito breeding. Of them, 2,100 people were prosecuted and a fine of Rs 80 lakh was collected from them.

A senior civic official said that the fogging will primarily be carried out at under-construction sites to prevent mosquito breeding during and before monsoon.

The on-going constructions sites are often seen to be breeding grounds for dengue mosquitoes. According to the municipal administration, developers have not been taking due care to stop mosquito breeding.

There are around 2,800 under construction sites in Mumbai. The BMC will spend Rs 19 crore approximately on fogging by hiring NGOs to do the work.