Despite the arrival of flamingos in Mumbai since February this year, the pink birds have not yet landed on Talawe wetlands. 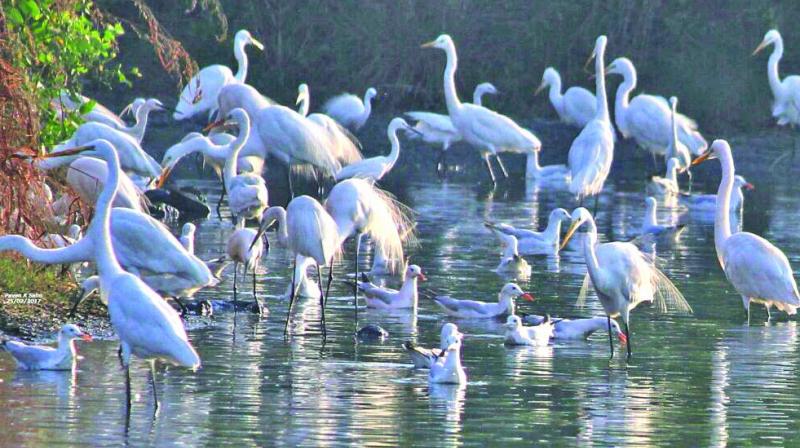 Many water birds use the Seawoods wetland. (Photo: Pawan Sahu)

Mumbai: Residents have expressed concerns over a project coming up at the Talawe (Seawoods) wetland, highlighting the fact that the ecological site is visited by thousands of native and migratory birds. Locals and avid bird watchers have claimed that there has been  a decrease in the sighting of regular birds that are usually seen at the wetland site. A report by Bombay Natural History Society (BNHS) states that the Seawoods wetland is an extraordinary wetland that is used by a large number of migratory and resident water birds.

“Pintail ducks and painted storks have not been seen in the same numbers as they were before. We fear that the construction work has affected the number of birds at the site. The absence of flamingos is the major example,” said Pawan Sahu, a bird photographer who regularly visits the site.  “On an average, around 40,000 to 50,000 birds including 10,000 to 15,000 threatened lesser flamingos can be observed roosting at this site during high tide in winter,” the BNHS report said. It also recommended that the site be declared a protected area.

Despite the arrival of flamingos in Mumbai since February this year, the pink birds have not yet landed on Talawe wetlands. “Even the Eurasian Curlews have significantly declined at the site as compared to the last year. The state government has to understand that the Talawe wetland is an important ecological site for Navi Mumbai,” said Mr Sahu.