The gang of four was involved in at least four such cases of robbery where cab drivers were attacked and their vehicles taken away. 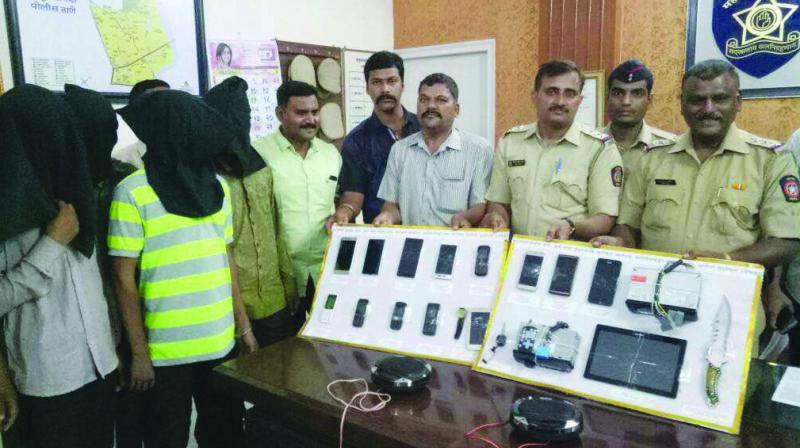 The nabbed accused in police custody.

Mumbai: Thane’s Kapurbawdi police has arrested four persons for allegedly robbing app-based taxi drivers and making away with their vehicles. The gang of four was involved in at least four such cases of robbery where cab drivers were attacked and their vehicles taken away.

According to police officials, on April 4, the accused called an app-based cab (Ola) near Palghar area saying they wanted to go to Majiwada, Thane. As they reached Majiwada at around 3am, one of the accused asked the cab driver to stop the vehicle saying he wanted to answer nature’s call. After the driver halted the cab, the accused allegedly beat him up, sprayed eye irritant on his face, and fled with his taxi. In another incident, the four took a vehicle from Wadala to Kapurbawdi Thane and using the same modus operandi, grabbed the driver’s wallet, pushed him out of the cab, and fled with his four-wheeler.

After all these incidents, Kapurbawdi police immediately formed a team to find the culprits behind the crime. Senior PI of Kapurbawdi police station, S. Bagale, said, “We realised that there was a gang using this modus operandi, so we collected information about four such cases from different police stations in Thane. We realised the accused would destroy the global positioning service (GPS)-enabled handsets installed in the app-based cabs. They would also use different mobile phones and SIM cards every time.”

Mr Bagale added, “Through CCTV footages of some areas and through our sources, we got a tip-off about these accused visiting Thane Ghodbunder area and arrested all four in the case. They have confessed to their crime. Till now, we have recovered only a Hyundai car and seven mobile phones. We are still investigating the matter and will soon recover the other vehicles.”