Maharashtra will set up a study chair in the name of Atal Bihari Vajpayee in each of the 13 universities in the state. 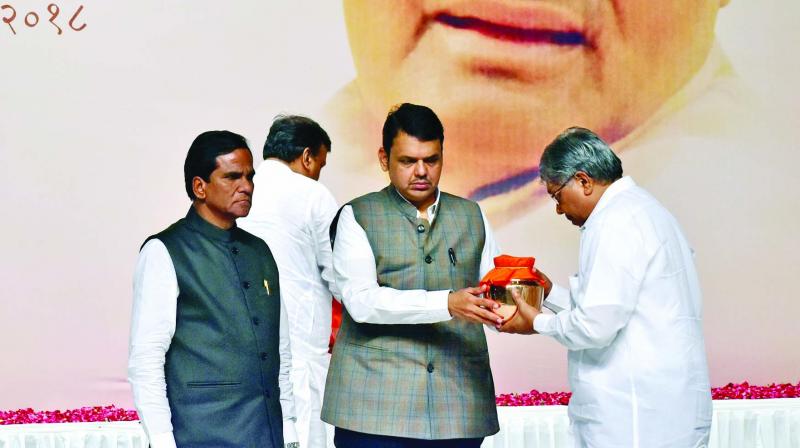 Chief minister Devendra Fadnavis at a Vajpayee condolence meeting at NCPA on Wednesday.

Mumbai: Chief Minister Devendra Fadnavis announced the memorial of former prime minister Atal Bihari Vajpayee in Mumbai on Wednesday. After the memorials on Chhatrapati Shivaji Maharaj, Dr Babasaheb Ambedkar, Shiv Sena founder Bal Thackeray, the state government will also construct a memorial of Vajpayee in Mumbai. Chief minister Fadnavis announced this at an all-party condolence meeting, which was organised at NCPA on Thursday.

The government has already declared the memorials of Shivaji Maharaj, which would be the tallest in the world. The memorials of Dr Ambedkar and Bal Thackeray have already been delayed and would be completed in the next two to three years.

Now, CM Fadnavis has announced the memorial of Vajpayee in the condolence meeting. Former prime minister Vajpayee was respected by all and was a towering personality, who is also fondly remembered as a poet. The memorial would be constructed in his remembrance, said CM Fadnavis.

An urn containing Atalji's ashes was brought in by state BJP president Raosaheb Danve, which was handed over to him by PM Narendra Modi and Mumbai BJP president Ashish Shelar and BJP President Amit Shah. CM Devendra Fadnavis, ministers Vinod Tawde, Girish Bapat and many BJP leaders were present at the airport when the urn arrived.

The BJP also announced a scholarship of `3 lakh each to ten students, who will research on Vajpayee's thoughts and life. The students can pursue their doctorate in any university, finance minister Sudhir Mungantiwar said.

The Maharashtra government will also set up a study chair in the name of former prime minister Atal Bihari Vajpayee in each of the 13 universities in the state. Finance minister Sudhir Mungantiwar made the announcement on Tuesday. He said that the state government has created a corpus of `20 crore for setting up the study chair in the name of Vajpayee in 11 state universities and two private varsities. Vajpayee, 93, died at the AIIMS Hospital in Delhi on August 16, following a prolonged illness.