Meanwhile, the BMC will be collecting the idols from the group. 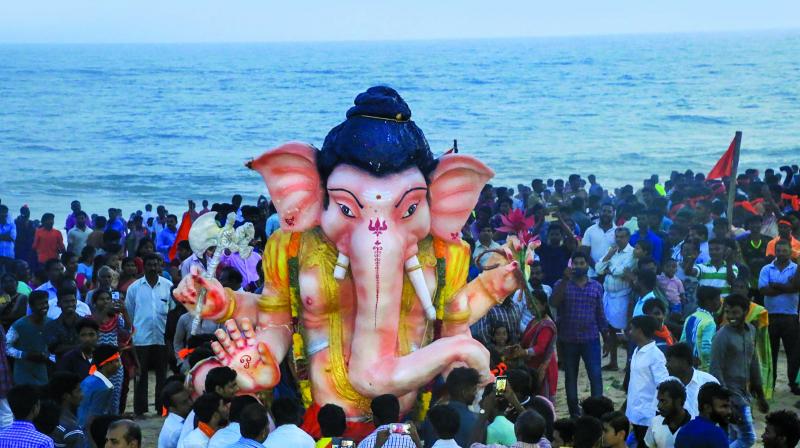 The same has been observed at the Dadar beach too this time, however in very few numbers.

Chinu Jeet Kwatra, who has been conducting regular cleanliness drives since last year, stated that around 700 Ganesha idols were collected during the festival in 2017 While around 200 idols have been picked up from the beach over three visarjan days this year, the group is gearing up for Sunday, the last visarjan day that usually sees devotees coming for the immersion in large numbers.

“Though the number of idols that we have collected is lesser than last year till now, yet a mere five percent reduction shows that the change in mindset among people is happening very slowly. While there are lot of sentiments attached to the festival, protecting environment during such celebrations is the need of the hour,” said Mr Kwatra.

It was only after the seventh day of Ganesh Chaturthi that thousands of dead fish along with dead turtles washed ashore at Juhu Beach. The same has been observed at the Dadar beach too this time, however in very few numbers.

“One of the major reason for such incidents is the pollution in the sea by POP idols decorated with chemical paints that harms the marine life. Although, the POP cannot be entirely discarded, we have to move to an ecofriendly way of immersion of idols, like the artificial pools. The recycled POP from the artificial pools can be used to make chalks for hundreds of schools,” added Mr. Kwatra.

Meanwhile, the BMC will be collecting the idols from the group. Officials claimed more dustbins have been placed at the Dadar beach.