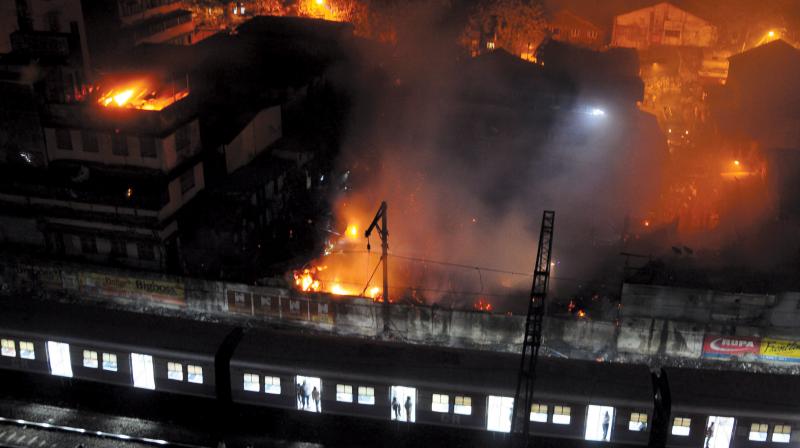 The injured children were flying kites when the fire broke out. (Photo: Asian Age)

Mumbai: At least six children between the ages of four and 13 were grievously injured as a major fire gutted around 15 shanties and several godowns in the Dana Bunder area in south Mumbai on Monday.

The fire broke out at around 6pm at the LLC compound, Masjid railway station, which was aggravated by at least two cylinder blasts from nearby huts. The children, who are residents of the area, were injured before the arrival of the fire brigade and were shifted to JJ Hospital by the fire brigade, where they are being treated.

Chief fire officer P. Rahangdale said, “The fire brigade received a call at about 6.07pm, and reached the spot within seven minutes. The lanes leading to the accident spot were so narrow, that fire engines found it difficult to cut through the crowd. The fire was doused by 9pm.”

Fire officials said they believe the children were flying kites in the area and the kite-thread got snagged in the over-head-wire that short-circuited from a small fire into a full-blown fire. The fire has burned down 15 shanties in the area.

While the exact cause is not known, deputy chief fire officer R. A. Choudhary said, “Prima facie it appears that a group of kids were flying a kite in the area, which is congested with godowns and huts. Their kite string got stuck in a high-tension overhead wire, which caused a spark leading to the fire. It spread and cylinder blasts happened. We are still investigating.”

Residents of the area confirmed that the children were playing in the area. There are at least 5 godowns in the area, which kept edible raw materials used to make samosas, as well as dry grass and wooden sticks used to make mops.

Prakash Bansode, who lives in the same lane where the fire occurred said, “There were no cylinder blasts, the fire started because of a short-circuit in the railway compound. One of the children got blown into the compound on the tracks, and when I jumped to save him, I touched the tracks, which also had current in them. My neighbours used a wooden ladder and a rod to come to the railway side and rescue the boy.”