Emergency evacuation was conducted for commuters stuck in metro. 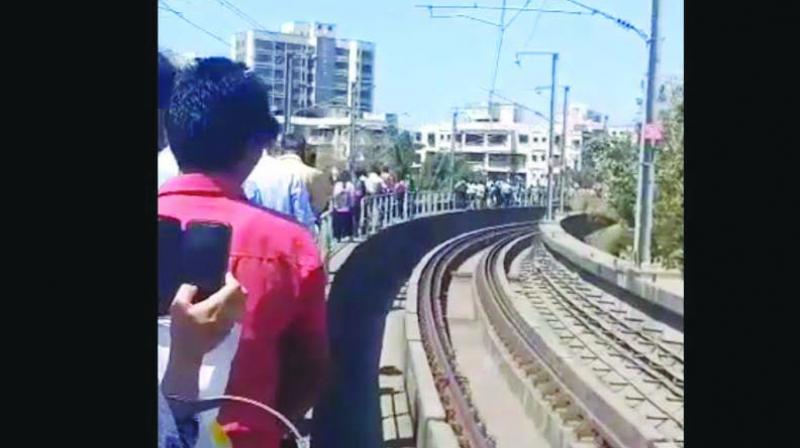 The services were disrupted for over two hours. As the services were unavailable, commuters chose to travel either in BEST buses and auto rickshaws, making the road below congested.

It took half an hour for Mumbai Metro One officials to inform Mumbaikars about disruption over a micro-blogging site. At around 1.20 pm on Thursday, a tweet on Mumbai Metro’s official account said, “There has been a technical problem with OHE. Thus #MumbaiMetroOne services have been temporarily disrupted. Our engineers are working on it.” This was followed by another tweet which said, “Due to technical problem relating to OHE, services of Mumbai Metro One between Versova and Chakala/J.B. Nagar disrupted.” The problem lasted for nearly three hours after which, at 4 pm, a third tweet on the account said, “Mumbai Metro One services resumed, trains are now running on schedule.”

Several commuters too took to twitter, slamming Mumbai Metro One Private Limited (MMOPL) for the disruption. A commuter tweeted, “#Mumbaimetro not working. From D.N. Nagar station. Roads flooded with traffic at the same time… frustrating!” Commuters stuck inside the Metro were evacuated on an emergency basis. Karn B. Ashar, tweeted, “Got stuck in #mumbaimetro emergency evacuation between Azad Nagar and Andheri Metro stations.” Mr Ashar also tweeted a video of the emergency evacuation carried out.

Later in the evening, MMOPL issued a statement sans details about the emergency evacuation.