Travel anywhere in MMR within hour by 2025: Madan

On Thursday, the MMRDA passed its biggest budget of around Rs 12,000 crore. 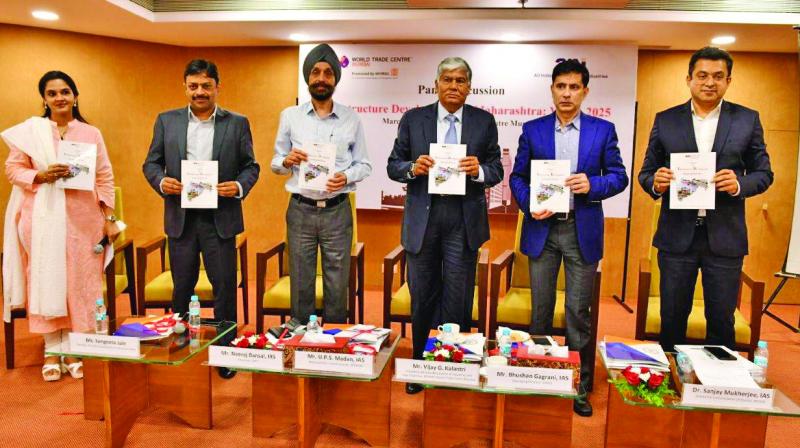 The metropolitan commissioner (third from left) at the event.

Mumbai: By 2025, Mumbaikars will be able to travel anywhere in the MMR (Mumbai Metropolitan Region) within an hour, metropolitan commissioner U.P.S. Madan, announced on Friday, while attending an event pertaining to the Infrastructure development of the state, organised by the World Trade Centre. He also declared that an e-system would be launched by the authorities within a few months, which would help the architects submit their plan to the authority without the hassle of visiting the office.

“The MMRDA has undertaken 12 metro projects for the city and the finance required for implementation of all these projects is close to Rs 1.28 lakh crore. It is for the first time in the history of this city that projects of such a large scale are being undertaken together,” said Mr Madan.  The metro projects also include the airport metro (Metro 8) to connect Chhatrapati Shivaji International Airport (CSIA) to the new airport that will be constructed at Navi Mumbai.

“The detailed project report (DPR) of the airport metro is being finalised and the bids will be called soon,” said Mr Madan.  Of the 12 projects, line 1 (Versova-Ghatkopar) is operational and construction of line 2A (Dahisar to DN Nagar), Line 7 (Dahisar East to Andheri East) and line 3 (Colaba-SEEPZ) has begun.

On Thursday, the MMRDA passed its biggest budget of around Rs 12,000 crore.

Meanwhile, Mr Madan also announced the authority’s plan to digitalise the process of approving project plans by architects. “Usually architects have to submit hard copies of the plan and come to the MMRDA office to get it approved. Now, we are planning to develop a software wherein the architect can upload the plan and does not need to come to the office. This will make the approval process easier and less time-consuming,” said Mr Madan.