About 5,200 CCTV cameras have been installed all over the city, which are collectively worth Rs 850 crore. 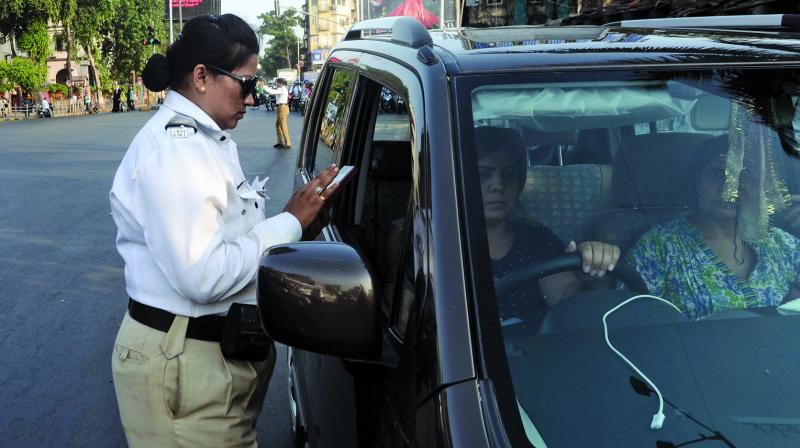 Mumbai: The e-challan system, which was put in place to collect fines from errant drivers, is not faring as expected, as several traffic violators are ignoring e-challans that are sent to their cellphones.

The number of traffic violations detected by closed-circuit television (CCTV) cameras has significantly risen from 2.5 lakh a month in 2016 to 4 lakh this year, while the recovery rate has dipped from 85 per cent to 25 per cent in comparison to the previous year’s figures.

Joint commissioner of police (traffic) Amitesh Kumar, confirming the dip, said that people still tend to follow the old-school system of getting a physical challan, and it would take time for them to adapt to the e-challan system, which is based on digital payment.

With the introduction of the e-challan system, the Mumbai traffic police (MTP) had stop seizing the licences of traffic violators and, instead, started issuing them e-challans, which they were expected to pay via debit/credit card on the spot or by making payments at the nearest Vodafone store.

About 5,200 CCTV cameras have been installed all over the city, which are collectively worth Rs 850 crore. Video grabs of the offence are attached to the email that is sent to offenders and they can also be accessed over the MTP’s mobile application.

But as the department tried to give the violators the liberty to retain their documents and only cough up a fine, they apparently took advantage of the facility.

Mr Kumar said, “First, we were only issuing e-challans, but looking at the low recovery rate, the department has decided to impound the documents of traffic violators and return them only after the fine is paid. If a person is found repeating the offences, a police officer will be sent to collect the penalty he is liable to pay.”

Traffic violations like rash driving, riding without a helmet or driving without a seatbelt and riding/driving under the influence of alcohol will invite a police visit to offenders’ homes, but minor violations like parking in a no-parking spot thrice will only call for an e-challan, he said.