Like its predecessor, the Tejas Express departs from CST at 5 am from Monday to Friday. 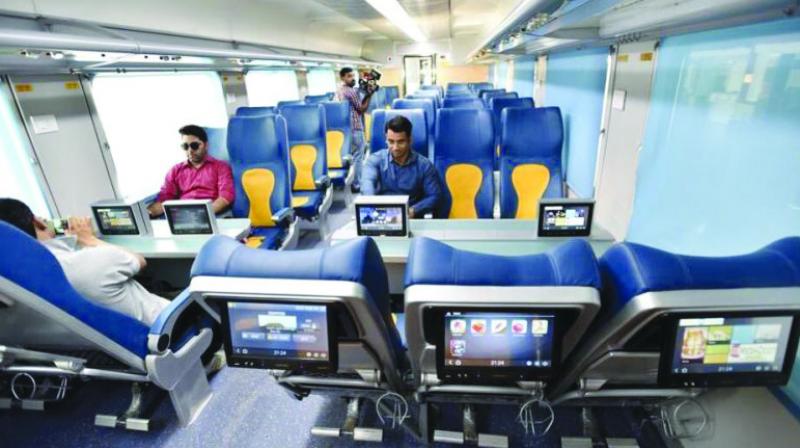 The LTT-Madgaon Double Decker Express, which would depart from LTT has been removed from service and replaced with the Tejas Express.

Mumbai: A day after its maiden run from Mumbai to Goa, Tejas Express — India's first high-speed and semi-luxury train — is all booked for the 10-day Ganesh festival, which starts from August 25. The waiting lists on Tuesday for air-conditioned economic chair car and executive class reached 170 and 10 respectively. Hundreds of people from the Konkan region who work in Mumbai return to their home towns and villages to celebrate the festival.

Narendra Samant, a native of Shiroda village, said that he would be more than happy to travel in the Tejas Express as it has reclining chairs where one can sleep undisturbed by other passengers.

He said, “I find individual chairs more spacious than berths. I can pull back the seat, pull out the leg rest and take a five-hour nap.”

Explaining the significance of the festival, Mr Samant said, “It is a huge deal for us Malvanis. We plan for the festival several days in advance and book our tickets two to three days before the festival, and we head back to Mumbai a day or two after we wrap up things there."

It also a known fact that trains such as the Konkan Kanya Express, Mandovi Express, Mangalore Express and the Jan Shatabdi Express see some of the densest crowds during the Ganesh Chaturthi season.

An official said, “As these popular trains usually have a wait list of more than 300, many passengers book multiple tickets, and this process starts from March itself."

People from the Konkan have booked tickets unabashedly for August 23 - two days before Ganesh Chaturthi - even though the ticket pricess are 40 per cent higher than the Jan Shatabdi Express', the most expensive train to the Konkan.

The LTT-Madgaon Double Decker Express, which would depart from LTT has been removed from service and replaced with the Tejas Express. Like its predecessor, the Tejas Express departs from CST at 5 am from Monday to Friday.

According to railway officials, the occupancy of the double decker train would reach a maximum of 80 per cent during Ganpati Chaturthi.

The double decker's failure has been attributed to its departure time from LTT. The train would have only 20 to 40 seats booked during its off season.