50 tonnes of blacktip sharks end up in fishermen’s nets

Fishermen stated that last monsoon too blacktip sharks were caught by the gill net boats. 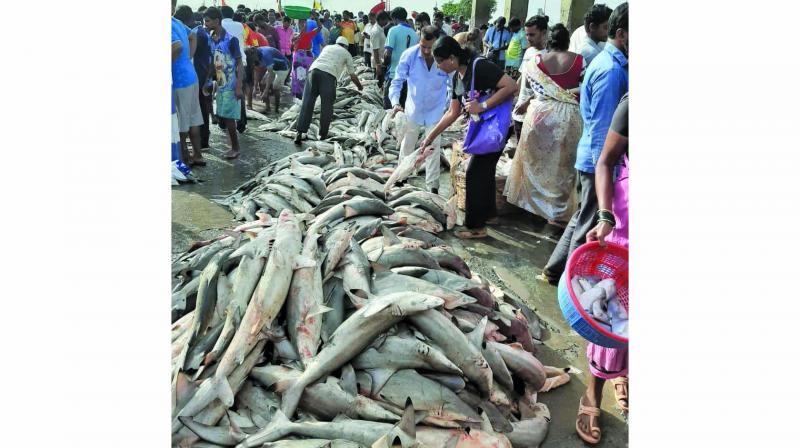 Blacktip sharks in the fish market.

Mumbai: With the monsoon ban on fishing in Mumbai now over, large-scale fishing of blacktip sharks is being witnessed in the deep sea. According to fishermen, around 100 gill net boats have caught around 50,000 kilograms of the same species of shark in only two days.

Fishermen and marine conservationists have raised alarm over the possible overfishing of these sharks, which could be due to the illegal export of its fins to international markets.

Fishermen stated that last monsoon too blacktip sharks were caught by the gill net boats. However it has been in abundance this year. They also expressed their apprehensions regarding sale of shark fins. Maharashtra has earlier seen seizures during their illegal export to Chinese and Vietnamese markets, where the fins are largely used for preparation of luxurious delicacy ‘shark fin soup’.

“Even though these shark meats are consumed, we have been alerting the fisherfolk about sale of their fins as its export is banned by the ministry of commerce,” said Ganesh Nakhawa, president of Pu-rse Seine Net Fisherman Welfare Association.

“It should be checked whether the fins of sharks are being cut before selling, this may indicate illegal export of fins. While these species are not threatened, sharks have low potential for producing off-spring which means their population could always be limited. It is important to ensure avoiding overfishing of any species of sharks to maintain ecological stock,” said N. Vasudevan, additional principal chief conservator of forest, state mangrove cell.

Marine experts stated that given the breeding season, the shoal of sharks could have landed in the fishing ground.

“During the breeding season, the sharks travel in groups, nearer to the fishing grounds due to abundance of food and dissolved oxygen in the monsoon period. However this is the first time I have witnessed such large catching of pelagic sharks in Mumbai. A detailed study is needed on this phenomenon which also entails about fishing of these creatures,” said S.G. Raje, former scientist with Central Marine Fisheries Research Institute (CMFRI).