Security beefed up in Mumbai for Dahi Handi

The police has appealed to citizens to register complaints on Twitter, emergency number and via SMS. 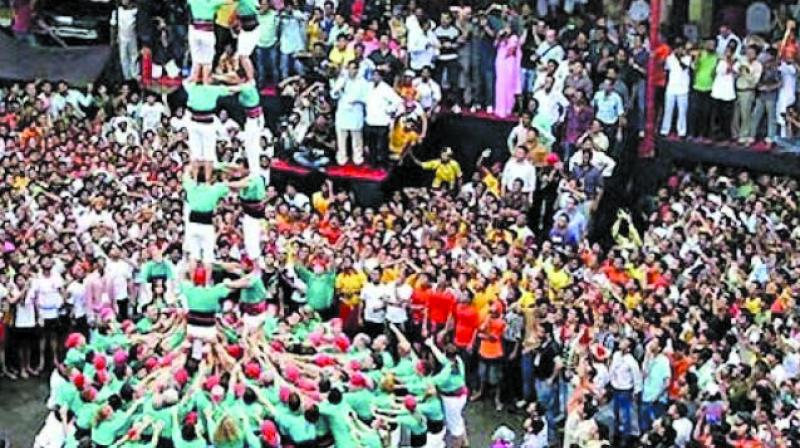 The police also requested organisers not to allow inebriated individuals to participate in events.

Mumbai: Security has been beefed up in the city ahead of the Dahi Handi festival on Saturday. Around 40,000 police personnel have been deployed in the city while special forces have also been positioned at the Iskcon temple in Juhu and major Dahi Handi sites to prevent untoward incidents.

The police on Friday issued a note stating that various police stations’ staff, Central Armed Police Forces, State Reserve Police, anti-riot teams, a quick response team and bomb detection disposal squad, and officers from the special branch, crime branch, traffic police and the home guard would be deployed in the various parts of the city. The police said they would monitor the Iskcon Temple, major Dahi Handi events and crowded places via CCTV cameras. Police personnel in civilian clothes will also be deployed along with a special team to prevent and tackle crimes against women.

The traffic police will make every effort to ensure the smooth movement of traffic and take strict action against people who will break the rules, the note stated.

The police has also appealed to all the Dahi Handi organisers to follow the Bombay high court’s orders and asked them to provide chest guards, helmets and safety belts to participants and also lay soft mats on the floor. The police also requested organisers not to allow inebriated individuals to participate in events.

Meanwhile, activist Swati Patil told The Asian Age that she had appealed to organisers of Dahi Handi events in Mumbai, Navi Mumbai and Thane to follow all safety measures that the court had mentioned in its order and also warned them if any Govinda dies or is severely injured during the creation of human pyramids, the organizations concerned would be dragged to court and she would make them the respondent in contempt petitions.

She further stated that her teams would visit various parts of the city and collect evidence to confirm if the rules were being followed.