As per IMD, the Santacruz observatory recorded a total rainfall of 286.4 mm, which is the fourth highest rainfall in the city since 1974 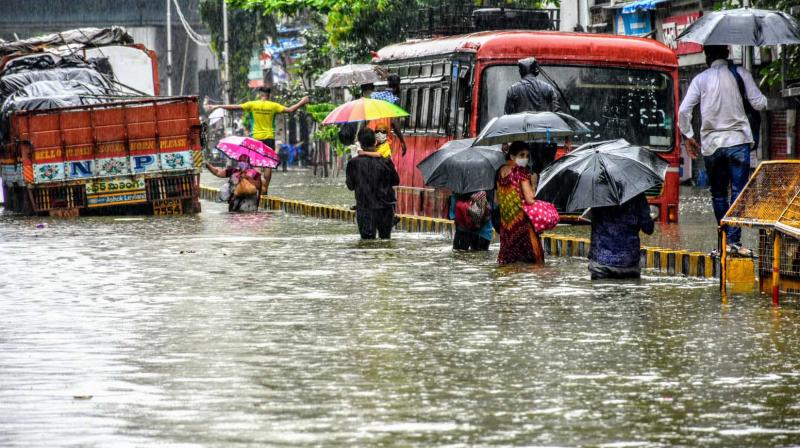 Mumbai’s life was thrown out of gear on Wednesday as the city received its second-highest rainfall in 24 hours in the month of September since 1994. The incessant rains caused flooding at several areas in the city and left the rail and road traffic heavily disrupted. According to reports, two security guards in Agripada area died after they were trapped in a flooded elevator.

The incident took place at Nathani Residency, a high- rise near Kala Pani junction of Agripada area. Security guards Jamir Ahmed Sohanan (32) and Shehzad Mohammed Siddhique Memon (37) took the lift to go to the basement to open a valve for water supply, a police official said. But due to heavy rains throughout the night, the basement was flooded, and the water rushed into the lift as soon as the doors opened, he said. Before the two could step out, the doors got closed and they were stuck inside, the official said. They pressed the alarm button to alert the residents, following which the police and fire brigade were called in. Fire brigade personnel cut open the upper portion of the lift and pulled the duo out but both were dead, probably due to drowning, the official said.

Rains across the island city and the western suburbs picked up late on Tuesday evening. There were intense spells across Mumbai overnight, a civic official said. On Wednesday morning, public transport services were hit and normal life affected in the financial capital due to heavy downpour and waterlogging. Several streets and low-lying areas were waterlogged due to overnight rains and the road traffic was also badly hit, a civic official said.

Some vehicles broke down in the water, affecting the traffic movement. Several people were seen wading through knee-deep water as they struggled to reach workplaces.

As per Indian Meteorological Department (IMD), the Santacruz observatory recorded a total rainfall of 286.4 mm, which is the fourth highest rainfall in the city since 1974. The record Mumbai rainfall in September in a day is 318.2 mm on September 23 way back in 1981.

“Mumbai received one of the highest showers in the last 24 hours of this monsoon season,” said KS Hosalikar, Mumbai centre Deputy Director General, IMD. The department has issued a yellow alert (heavy rain at isolated places) for Mumbai, Thane and Raigad and an orange alert (heavy to very heavy rain at isolated places) for Palghar. It has warned that the rains could lead to localised flooding and water logging in low lying areas.

The BMC-run Nair Hospital, which is a Covid-19 dedicated hospital, was also flooded and its outpatient department (OPD) was shifted to the casualty ward inside the building.

As the level of Mithi river rose dangerously, people living in surrounding areas in Kurla Kranti Nagar were shifted to safer places. After the water level receded in the afternoon, they returned back to their homes.

The railways also bore the brunt of monsoon fury as the suburban train services on both Central Railway and Western Railway were suspended in the morning. The services were resumed in the afternoon after the rains receded. Railways also cancelled or rescheduled many long-distance trains following the heavy rains. The BEST bus services were diverted from many places due to the waterlogging.

As a precautionary measure, BMC chief Iqbal Singh Chahal asked that all government and private offices and establishments in the city to be shut.

Maharashtra Relief and Rehabilitation Minister Vijay Wadettiwar has informed that five teams of the National Disaster Response Force (NDRF) have been kept ready in view of heavy rains in Mumbai, Thane and Palghar districts.

The Bombay High Court on Wednesday suspended its hearings scheduled for the day, including all virtual hearings, in view of the heavy rainfall in the city.

Amidst the inconvenience, the heavy rains have also brought good news to Mumbaikars, as all seven lakes supplying water to the city have reached their full supply levels, which means that the water woes for the metropolis are as good as over for the entire year. Of them, four lakes – Tulshi, Vihar, Modak Sagar and Tansa have already started overflowing.