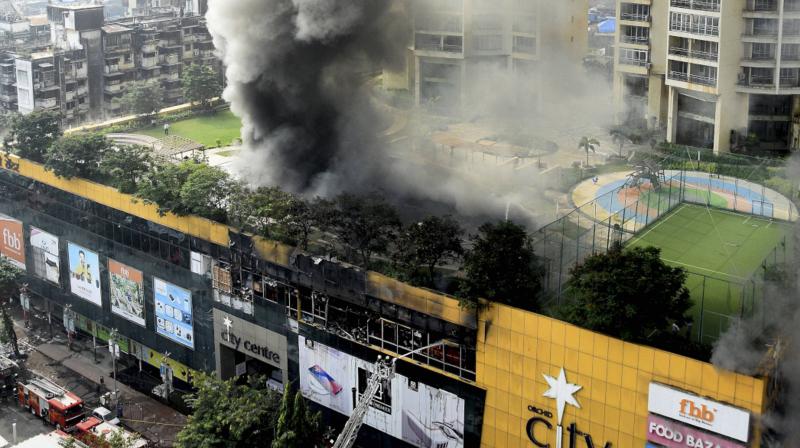 Smoke rises from City Central Mall after fire broke out in it, in Mumbai, Friday, October 23, 2020. (PTI)

Mumbai: The Mumbai Fire Brigade on Friday continued its efforts to douse a major fire that broke out in a city mall on Thursday night. The fire brigade evacuated around 3500 people residing in a building adjacent to City Centre Mall which caught a huge Level-5 fire on Thursday evening. Speaking to the Asian Age a fire brigade official on Friday evening said that the fire was under control but efforts to douse it off were still on.

The mall is adjacent to ground plus 55-story Orchid Enclave tower and hence this tower was evacuated soon after the fire broke out as it became difficult for people living in it to even breath.

Ground plus four-story City Centre Mall situated on Bellasis Road is at a walkable distance from the Mumbai Central railway station is one of the busiest malls and it houses the city's biggest mobile phone repair and accessories market. For the occupants of the mall, tragedy struck twice in a decade. All those mobile repair shops were situated at another mall — Sara-Sahara — that was completely gutted in a fire in 2011, after which the association of all shopkeepers decided to shift the market to City Central mall.

The mall is packed from all sides and fire that broke out in the mall was so huge that its smoke was seen from remote areas too.

Though nobody was injured in the fire, firefighter Ramesh Chaugule received minor injury on his right-hand finger and another fireman Shamrao Banjara suffered from suffocation during the fire fighting. Both were treated and discharged from state-run JJ Hospital.

The fire had spread on the second and third floors of the mall. Fire officials deployed around 250 firemen and 24 fire engines in the firefighting operation. They closed the road outside the mall for vehicular movement.