The detained people included, men, women and boys who had shouted slogans against the memorial that the government has planned. 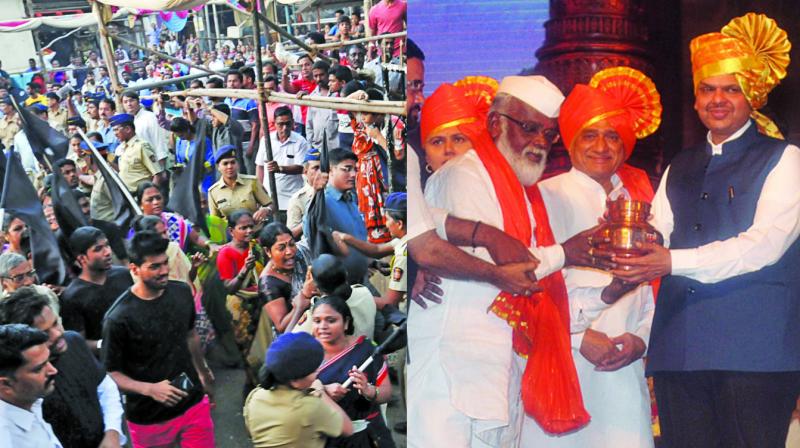 Members of the fishing community protest against the planned Shivaji memorial, in Cuffe Parade on Friday and chief minister Devendra Fadnavis with a kalash filled with water collected from all the rivers in the state, which would be used for the memorial’s foundation stone laying ceremony. (Photo: Debashish Dey)

Mumbai: The silent protest that fishermen had planned against the bhoomi poojan of Chhatrapati Shivaji Maharaj memorial in the Arabian Sea was foiled when the police detained all the protestors ahead of Prime Minister Narendra Modi’s visit on Saturday to lay the foundation stone for the memorial. Around 200 people had gathered at Macchimar Nagar in Cuffe Parade wearing black t-shirts and holding black flags. From there, these members of the fishing community had planned to conduct a bike rally to stage a protest against the Prime Minister’s proposed bhoomi poojan.

Fishermen and people from the Akhil Maharashtra Machhimar Kriti Samiti (AMMKS) had gathered in large numbers, but the moment they started moving their bikes, around 100 police officials caught hold of them and put them in three police vans. The police then took the protestors to Cuffe Parade police station. The detained people included, men, women and boys who had shouted slogans against the memorial that the government has planned.

Before being detained, AMMKS leader Damodar Tandel said, “We are not against the statue but against the place it is coming up in. This will destroy our lives. Where and what will we eat? The island they are planning the memorial on would get flooded during high tide, and hence they even want to build an eight-metre wall to stop the flow of water, which could be dangerous as well.”

Meanhile, Maharshtra Macchimar Sanghatna (MMS) leader Mahesh Tandel claimed that many fishermen from villages are arriving in the city on Saturday to express their disappointment over the decision to build the memorial in the Arabian Sea. Mr Tandel said, “We have not given up. After a meeting with the chief minister on Thursday, my sanghatna postponed the protest till December 25 on his request as we were assured that the government would come up with solutions for our problems.”