The aerodrome has even approached PETA to clear the dogs from its runway. 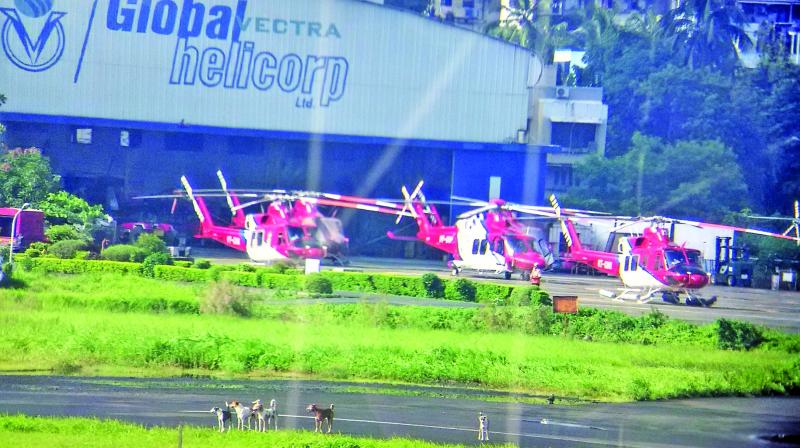 A pack of dogs at Juhu aerodrome.

Mumbai: The presence of dogs and garbage on runways has led delay in landings at Juhu aerodrome several times. The operators at Juhu aerodrome have written to the Airport Authority of India’s (AAI) headquarter in Delhi, pointing out the difficulties they face due to the excessive garbage and dogs on the runway.

The operators have complained that they had to deny landing permission to the flights due to the presence of dogs on the runway. AAI has claimed that it has taken up the matter with the collector as well as the Municipal Corporation of Greater Mumbai (MCGM). The Juhu aerodrome is the third highest airport with the net profit of Rs.60.08 crore. One of the letters accessed by The Asian Age mentioned that Oil and Natural Gas Corporation (ONGC) that pays 23 crores per annum as rent, has expressed its disappointment to AAI and has offered its assistance to the stakeholders to clear the Juhu aerodrome runway.

One of the stakeholders claimed, “On December 22 there has been an instance where a pilot was asked to go around due to the presence of eight dogs on the runway.” Senior officials claimed that the dogs would continue to hinder the operation until the slums around the aerodrome are cleared. The aerodrome has even approached PETA to clear the dogs from its runway.

According to a senior AAI official, the aerodrome had approached People for the Ethical Treatment of Animals (PETA) who in return had written to the civic authority. “Several meetings have taken place between the collector as well as the environment assessment committee. The officers are doing their best to keep the dogs away from the runway, however, due to the existing slums around the aerodrome and the canteens of the stakeholders it gets difficult to keep all the dogs away from the aerodrome.”

The senior official added that the canteen operational in the airside of the aerodrome attracts the four-legged animal towards the runway. “These private canteens were given permission to operate a few years ago as there was no demarcation of operational and non-operational areas but however they are now precisely defined and are against the Bureau of Civil Aviation Security (BCAS) rules. The rules need to be implemented, and the major stakeholders have been informed of the same,” said a senior AAI Official.  Airport Director of Juhu Aerodrome, M K Bimal was not available to comment.