BJP candidate is held for assault 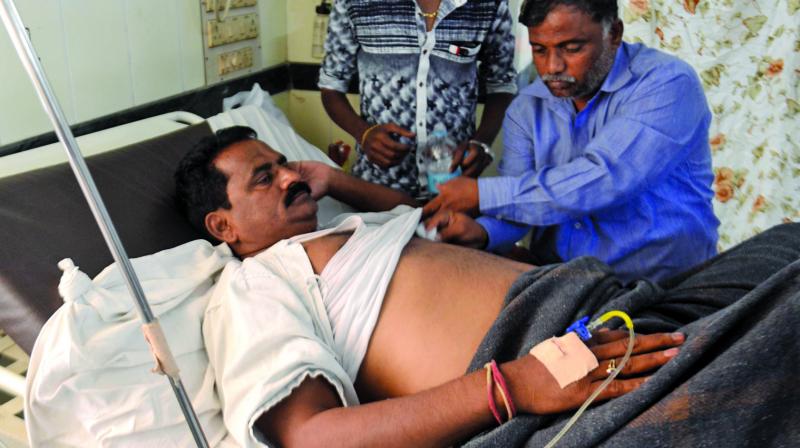 MNS corporator Sanjay Turde is being treated for fractures in one of his legs and will undergo a surgery on Tuesday. (Rajesh Jadhav)

Mumbai: The V.B. Nagar police in Kurla has arrested seven men, including a Bharatiya Janata Party (BJP) leader, for attempting to murder Maharashtra Navnirman Sena (MNS) corporator Sanjay Turde (50) in Kurla on Thursday night. One of the arrested accused is Sudhir Khatu (40) of BJP, who lost to Mr Turde in the civic polls in Kurla. Khatu is also a former MNS corporator.

The accused persons allegedly attacked Mr Turde with paver blocks, iron rods, bamboo sticks and swords, where the former sustained injuries and was rushed to the civic-run Rajawadi Hospital. Mr Turde is being treated for fractures in one of his legs and will undergo a surgery on Tuesday. According to the police sources attached to the V.B. Nagar police station, Mr Turde won the civic poll elections with flying colours from ward number 166 with a lead of 1,100 votes in Kurla, defeating Khatu. On Thursday following the declaration of results, Khatu along with six other men allegedly attacked Mr Turde outside the two-wing building in which the corporator resides. The six men who were arrested along with Khatu have been identified as Kiran Pawar (31), Hemant Pawar (30), Sunil Madgunde (28), Gajanan Korvi (34), Ganesh Kesarvan (19) and Vaibhav Ghusalkar (19).

The police source added that the arrested men have been identified to be associated with BJP and following Mr’s Turde victory, Khatu and his supporters were upset. In the attack on Mr Turde, the MNS leader sustained injuries on the leg, while six of his supporters who came to his rescue sustained minor injuries. All the injured persons were rushed to the civic run Rajawadi Hospital.

Speaking to The Asian Age, investigating officer of the case, sub-inspector R. Patil said, “We have arrested seven accused in the attempt to murder on Mr Turde and have booked them under section 307 (Attempt to murder) of the Indian Penal Code. The seven accused will be remanded in police custody till Tuesday”.

When The Asian Age contacted Mr Turde, he said, “After the results of the civic polls were declared, the losing candidate of BJP, Sudhir Khatu, came to my area and attempted to kill me along with his men. I was saved only because of party workers and supporters who sustained minor injuries.”