Eman’s sister thanks media for moral and monetary assistance

A social campaign has been launched to lessen the family’s financial burden. 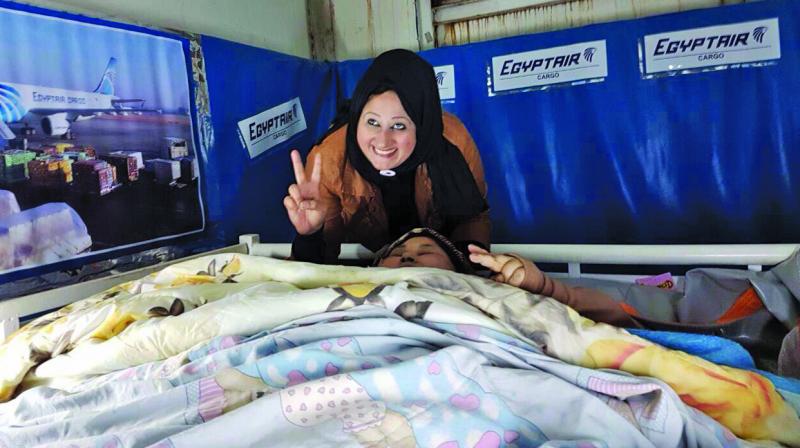 Shaimaa with her sister Eman Ahmed (lying on the bed).

Mumbai: Shaimaa, the sister of Egyptian national Eman Ahmed (36) who is admitted at the privately-run Saifee Hospital for bariatric surgery, has thanked social media and the media for making Eman’s treatment possible, which was otherwise too expensive and inaccessible. Shaimaa expressed her views to The Asian Age through hospital officials who could converse in Arabic.

Confined to her bed for 25 years, Eman could not receive the necessary medical aid in her home country, Egypt. Following this, Eman’s sister Shaimaa made appeals through social media campaigns to seek medical help.

That is when bariatric surgeon, Dr Muffazal Lakdawala stepped in after Eman was refused a visa to visit India for her treatment. Dr Lakdawala tweeted to India’s Minister of External Affairs, Sushma Swaraj, seeking help.

Dr Lakdwala, who is now treating Eman, said, “There is some divine connection. I just saw her and felt like she is in need of medical assistance for her health.”

“After being admitted to Saifee hospital, she is happier and is responding well to the treatment and with god’s grace people are coming forward to help. Her account details are mentioned on social media sites,” he added.

Eman’s sister Shaimaa said, “She is thankful to Indian media, which made this possible, and at the same time helped Eman move for the first time in 25 years out from her house to Mumbai. All the efforts and blessings that have come from around the world after she was admitted, and the media have played a major role helping Eman in her journey so far,” added Shaimaa.

Eman and her sister Shaimaa have expressed their deep gratitude to the good doctor, his team as well.

However, Eman and her family still suffer a financial burden. A special BitGiving campaign on social media has been launched to share this burden.

Eman is currently under observation. Before any surgical intervention, she will need a series of medical tests including routine body check-up and a complete body profile test.

Doctors have conducted a special gene study for the 91 different types genes, which were extracted to find out the cause with the obesity related syndrome.