The Shiv Sena’s tally has reached to 87 against BJP’s 83. 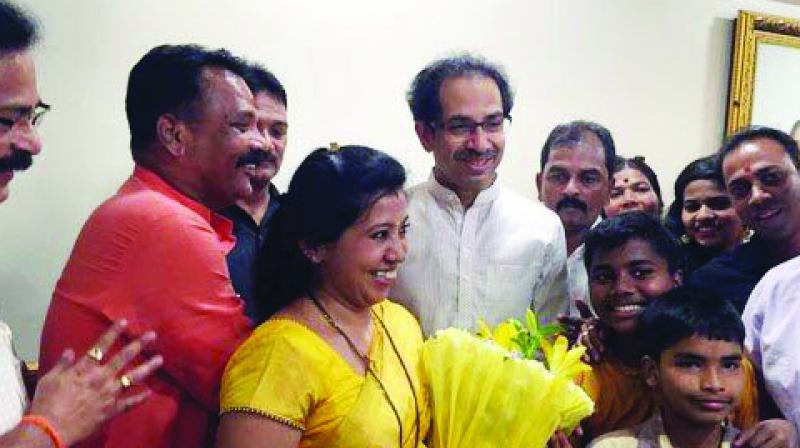 Mumbai: In order to achieve majority and appoint a Sena mayor, the Shiv Sena has embraced two party rebels, who got elected in the Brihanmumbai municipal corporation (BMC) polls. Snehal More from Vikroli and Tulshidas Shinde from Dindoshi joined Sena on Friday in the presence of Sena chief Uddhav Thackeray at Matoshree, Bandra (east). Another independent Changez Multani from Andheri also extended his support to the Sena. With the development, the Sena’ tally has reached to 87 against BJP’s 83. So far, the Sena was hinting to claim the mayor’s post without taking help from the BJP.

While accepting congratulations from the party workers and newly elected corporators, Mr Thackeray refused to speak on joining hands with the BJP. “Let me enjoy my success. Getting elected for the fifth time is a big thing for us. I have not thought of going along with any party,” he said.

Sources said that the Sena is try to get maximum number of corporators so that it can have its mayor for ‘five years’. “We are trying various permutation combinations to get a majority over the BJP. We want our mayor for five years and won’t share power with anyone,” a senior Sena leader said, hinting that the party might not go with BJP. The former ally of Sena, BJP won 82 seats and one independent has extended support to it.

Another possibility would be seeking help from MNS chief Raj Thackeray whose seven corporators got elected, the sources said.

The MNS chief had asked for pre-poll alliance earlier, which was refused by the Sena.