Monkey freed from guard who ‘sexually abused’ her

No action has been taken against the watchman as results of the medical tests on the monkey are awaited. 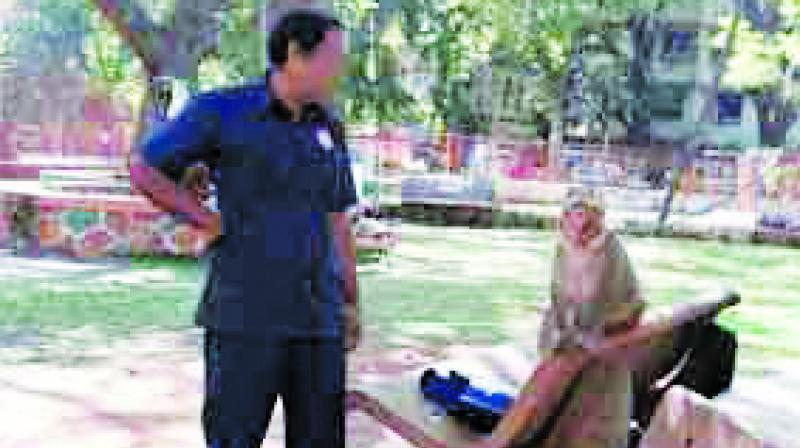 The watchman and monkey.

Mumbai: An adult female monkey has been rescued by the Forest Department in Vile Parle (east) after it was alleged sexually assaulted by a watchman, who had kept it tied for almost two years. The monkey was rescued after Sangeeta Ruia, an Animal Welfare Officer (AWO), contacted the department’s 1926 call centre number on Thursday.

The department sent a team on the same evening to rescue the monkey. Locals said the monkey was kept tied to a tree. Forest department officials have taken the monkey into their custody. No action has been taken against the watchman as results of the medical tests on the monkey are awaited. Recalling the behaviour of the monkey, Ms Ruia   alleged, “I saw the monkey in a compromising position with the watchman.”

When the team arrived, she made the officials understand the seriousness of the situation. Ms Ruia alleged that despite saying she wanted to register a First Information Report (FIR) against the watchman, the team of officials turned her down. “The officials told me that they would take the monkey along with them and take necessary action according to their rules. I had asked them to update me as soon as medical tests on the monkey are done. However, I’m yet to hear from them,” alleged Ms Ruia.

If proven, the watchman will be booked under sections 9 and 51 of the Wildlife Protection Act (WPA), 1972, section 11 of Prevention OF Cruelty to Animals (PFA) and section 377 of Indian Penal Code, which has either lifetime imprisonment or punishment that can extend to 10 years (Bestiality- sexual relations between a human being and a lower animal).

Mr Pawan Sharma, founder of Resqink Association of Wildlife Welfare (RAWW) who closely works with the department, said, “Monkeys are the most exploited and ignored species when it comes to their management and welfare tasks. We are working on these issues with the forest department to ensure that they are immediately addressed. We are looking out for alternatives till an independent rescue facility of the forest department for the city is ready.”

Shakuntala Mazumdar, president of Thane Society for Prevention of Cruelty to Animals (TSPCA), said, “Such cases are rare to find in cities. I have seen such six cases till now however, none of them could be proved medically and hence couldn’t be pursued further.”