Mumbai: Parties take stock of areas that ditched them

The Sena did well in Marathi-dominated areas, whereas the BJP won majority of seats, where Gujarati voters lived. 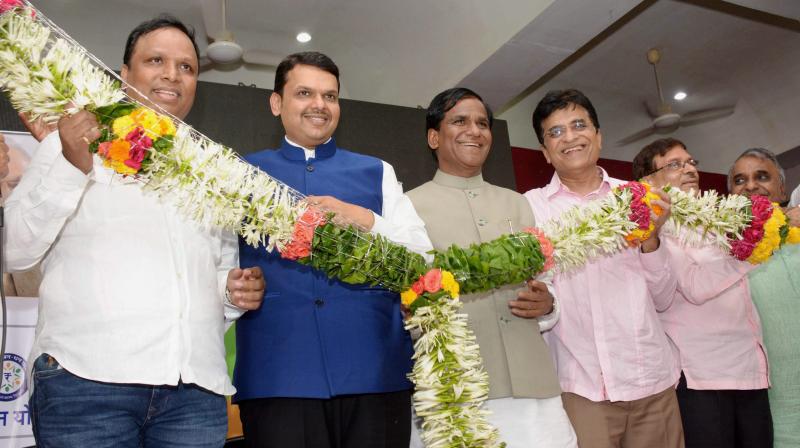 Chief Minister of Maharashtra Devendra Fadanvis and party state president Ravsaheb Danve along with Ashis Selar, Kirit Somaiya and other leaders being garlanded during celebrations after the BMC poll results at Mumbai BJP office. (Photo: PTI)

Mumbai: While the Shiv Sena and Bharatiya Janata Party (BJP) emerged as the top parties by winning 84 and 82 seats respectively in the Brihanmumbai Municipal Corporation (BMC) polls, there were several city areas, which proved to be their nemesis. Failing to perform impressively in these areas, these parties could not achieve their goal of getting an absolute majority on their own in the civic body.

The Sena did well in Marathi-dominated areas, whereas the BJP won majority of seats, where Gujarati voters lived. After surging ahead in the initial stage, the Sena failed to continue its march in the later stages of voting.

A glance at the BMC election results shows that the Sena failed miserably in areas like Mulund, Borivali, Ghatkopar, Malad, Goregaon, which have a sizable number of Gujarati voters. But what must have rankled the party is its inability to win from Girgaum, which is long considered as its stronghold.

In D ward, which consists of Girgaum, Tardeo areas, Sena won only one seat as against the BJP’s four wins. In R-Central ward (Borivali), Sena won only three seats as compared to BJP’s six. In Kandivali, it scored victory in only two wards, whereas the BJP bagged as many as 10 seats. In Malad and Goregaon, the Sena won only four and three seats, whereas BJP won handsomely with eight and seven wins. In Mulund too, the BJP all the six wards.

Barring Girgaum, the BJP failed to make a dent into Sena’s dominance over Marathi-dominated areas. In H-East ward (Bandra-Santacruz) and F-South (Shivadia aka Sewree), it drew a blank as Sena won as many as eight and six seats respectively. Similarly, the BJP could not win a single seat in Marathi-dominated Worli, whereas got just one seat in Dadar-Mahim. Sena won majority of seats from these areas.