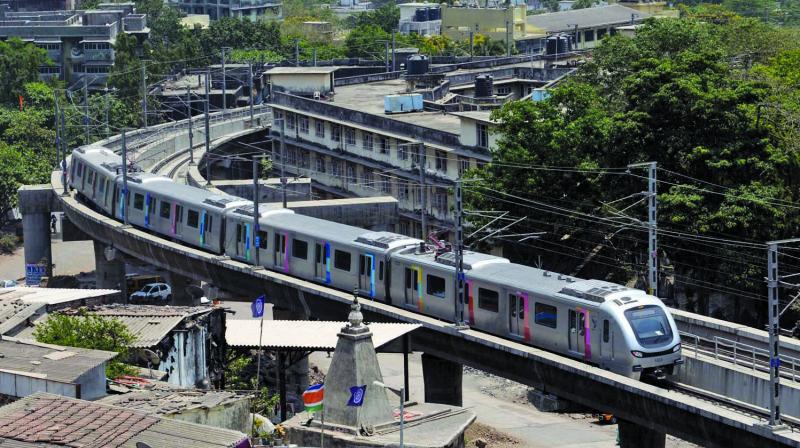 The Metro 2A and 7 are expected to be thrown open to the public by December 2019. The MMRDA had written to central ministry as well as the department of economic affairs (DEA) to seek assistance in the matter.

Mumbai: In a major setback to the “Make in India” policy, the Mumbai Metropolitan Region Development Authority (MMRDA) has decided to relax the condition which states 75 per cent of the metro coaches are to be manufactured in India. International banking firm Asian Development Bank (ADB) had opposed this provision of the policy. The bank is financing three metro projects. Hence, after discussions with the ministry of urban development (MOUD), the authority has decided to relax this provision. The new terms will be finalised by next week. It was feared that this condition would delay Metro projects as domestic manufacturers don’t have the capacity to make required rakes in next two years. The MMRDA is aiming to start operations of two Metro lines by 2019.

Metropolitan Commis-sioner, UPS Madan said, “We have resolved the issues. We had a meeting with MOUD on Thursday where we decided to relax the provision of the policy. The provision of procuring 75 per cent coaches from the state has been relaxed. The ADB and Delhi Metro Rail Corporation (DMRC) has also agreed with this.” He also added, “One more meeting will be held to finalise the procurement terms, following which we will float tenders for the coaches.”

The ADB had expressed it reservations last year, as its officials claimed that delay in procurement of rakes could cause a delay in commencing the corridor.

The Metro 2A and 7 are expected to be thrown open to the public by December 2019. The MMRDA had written to central ministry as well as the department of economic affairs (DEA) to seek assistance in the matter.

The authority plans to procure 63 driverless trains for the three metro corridors. Each train will comprise of six coaches. Previously, it was decided to procure only 15 coaches from outside India. However, now this too may be relaxed.