The accused cheated people by offering to sell a shop in the building — a sale which he never made. 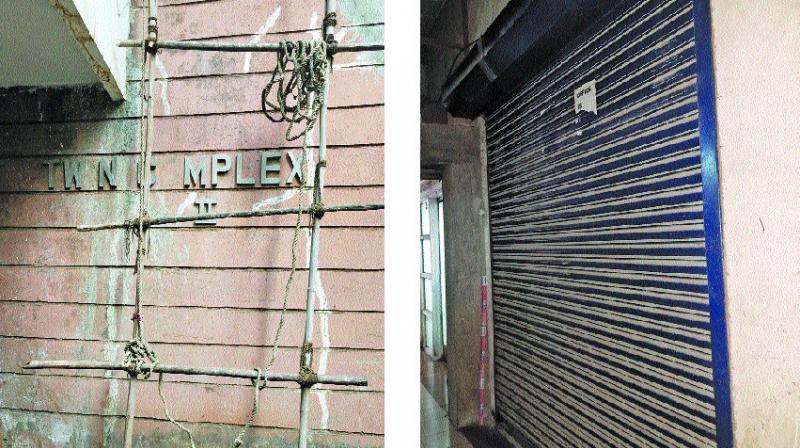 The sealed shop in the Twin complex 2 building.

Mumbai: The MIDC police on Sunday registered a case against Kishor Rawat (35) for cheating five persons and the society of a building at Marol in Andheri east. The accused, Rawat, cheated people by offering to sell a shop in the building — a sale which he never made. His modus operandi was to take token money and make up excuses for continuing the official procedure for sale. The complainant Kanta Singhania was duped of Rs 1 lakh even as the accused is believed to have conned 10 others of Rs 25 lakh. The police is likely to arrest Rawat soon as presently, he has been admitted to a local hospital where he is being treated for his heart ailment.

Police sources attached to MIDC police station said that Singhania, who runs a business, was looking for a shop to rent in the Andheri locality. To help out Singhania, a friend of hers approached Rawat, who offered to sell his shop. When Singhania and Rawat met to see the shop, Singhania liked the shop in an instant and gave token money of Rs 1 lakh to Rawat. They agreed to meet a few days later when Rawat would give her a no-objection certificate (NOC). When Singhania called Rawat at the appointed time, the latter refused to take her calls.

When the complainant approached the society Twin Complex II for a NOC, they informed her that Rawat was a cheat and had cheated five others on the pretext of sale of the same shop. The society told her that he was supposed to pay society bills worth Rs 4.15 lakh. When she came to know about all of this, she registered a complaint with MIDC police station against Rawat.

Shailesh Pasalwad, senior police inspector, MIC police station, told The Asian Age, “We have booked Rawat for cheating under section 420 of the Indian Penal Code. We will make arrests after he is discharged from hospital.”

Rawat is currently being treated at a local hospital for a heart ailment. The police has recorded the statement of the complainant and sealed the shop owned by Rawat.