Three municipalities go to polls, results on May 26 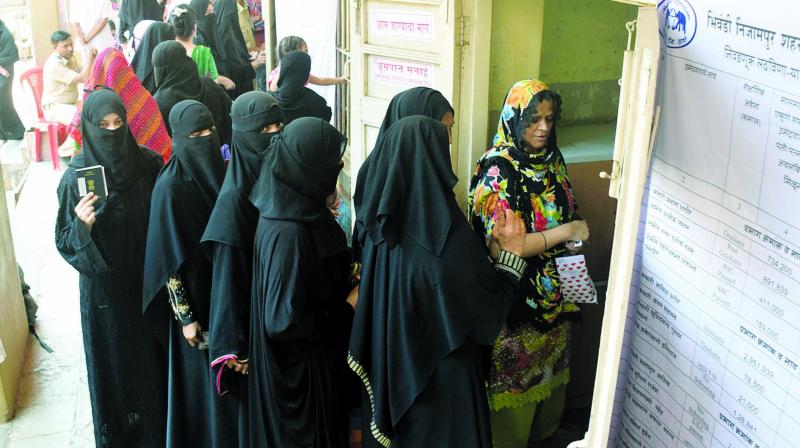 Voters line up to cast their vote for the Bhiwandi Municipal Corporation election. (Photo: Deepak Kurkunde)

Mumbai: Voting for three municipal corporations took place in Maharashtra on Wednesday, with ruling parties BJP and Shiv Sena and opposition parties Congress, NCP, Peasants and Workers Party, Samajwadi Party and local alliances as main contenders for these municipalities. On an average, voting was 55 per cent.

The newly-formed Panvel municipal corporation saw 53 per cent voting. The BJP had deployed all its power in the city. Mumbai BJP chief Ashish Shelar and minister of state Ravindra Chavan were given charge of the election. A marginal force in the city three years ago, BJP, in 2014, won the assembly seat. City MLA Prashant Thakur in 2014 ditched his old party, Congress, to join the BJP. His family holds considerable control over politics in the city and so, BJP hopes to win the election on its own. In Panvel, BJP was locked in a fight with Sena on the one side and Congress-NCP-PWP alliance on the other.

The Bhiwandi-Nijampur municipal corporation, which also went to polls on Wednesday, saw 53 per cent voting. While the city has been a Congress bastion for the longest time, BJP’s fortunes are riding high after winning the Lok Sabha seat from here in 2014. The party is banking on “son of the soil” sentiment, with BJP MP Kapil Patil, who was till recently with NCP, belonging to the local Agri community. BJP is trying to explore his influence in an otherwise Muslim-dominated city.

Another minority dominated city, Malegaon from Nashik district, saw 60 per cent voting on Wednesday. BJP is fielding 29 Muslim candidates in the city to woo minority voters. However, Malegaon has been a stronghold of the local outfit, Malegaon Vikas Aabhari. After winning in 168 municipal councils out of 260, 11 municipal corporations out of 14, and 10 zilla parishads out of 25, BJP seems upbeat about this election. The results are scheduled for May 26.