The much-talked about train left Karmali at 2.30 pm on Tuesday and reached CST at 11 pm, with its interiors wrecked by the passengers. 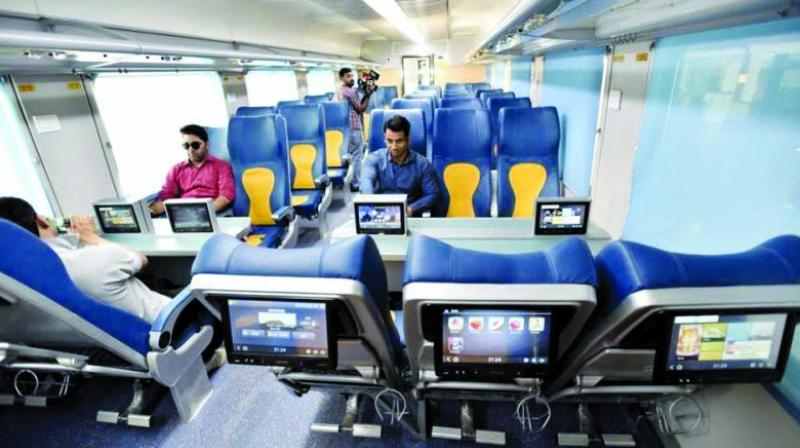 The RPF will check CCTV footage to nab the culprits.

Mumbai: The Mumbai-Goa Tejas Express, the country's first high-speed semi-luxurious train, returned to the city in a mess after some passengers thrashed the LCD screens, stole headphones, soiled the toilets and littered all over the train.

The railway authorities were shocked to see the mess on the train, following which they have now appealed to passengers to safeguard the Tejas Express and treat it like their own property.

The much-talked about train left Karmali at 2.30 pm on Tuesday and reached CST at 11 pm, with its interiors wrecked by the passengers. It will be recalled that the train has been fully booked up to Friday this week as well as during the Ganesh Chaturthi season.

Aditya Tembe, a passenger who was travelling by economic-class on the train, described the chaos that ensued once they departed from Karmali. “Some of the passengers tried to remove the LCD screen by pulling on its hinges. After a while, a railway official came and tightened the screws,” he said.

Rueing the lack of civic sense prevailing among the passengers, he said the toilet, which is state-of-the-art combination of a bio and a vacuum toilet, began to stink an hour into the journey as people did not bother to use the flush. "The toilet was soiled and was stinking as the people didn't even bother to flush properly after they used it. In fact, I had to flush twice until it was clean enough to be used.”

Senior divisional security commissioner, Sachin Bhalode said,  “We will check the CCTV footage to identity the culprits. The cameras have been placed in vestibule and corners of the compartment.” Railway activist Nirmal Tikamgarh and ex-Divisional Railway User Consultative Committee (DRUCC), who was present at the inauguration which saw the train set off on its maiden journey on May 22 from CST, felt that any kind of littering or acts of vandalism should not be tolerated by the railway authorities. “Luxury high speed trains like Tejas are a matter of pride. If this kind of vandalism continues, the railways will think twice before starting any such trains to and from Mumbai to any other metro.”

A maintenance staff aboard the train during the Karmali-Mumbai journey said, “The floor of the train was littered with cups, pet bottles, wrappers and bags of chips, which we had to clean up at the end of the journey. The amount of garbage found aboard Tejas was just like on any other train.”

Central Railway (CR) chief public relations officer, Narendra Patil has appealed to the public to maintain civic sense aboard the train. “It is true that the train was in a bad shape when it came back yesterday. We, the Indian Railways, want to appeal to the people of India to use these facilities with a sense of responsibility. After all, the railways belong to us and not just the government. And Tejas is something we are really proud of as a nation, hence it is our humble request that passengers keep the railways as clean as their homes.”

Currently, the Railways fines commuters a sum of Rs 500 for littering on any railway property, including trains. But the law has many loopholes as the person has to first appear before a railway magistrate, who will decided if he/she has to pay a fine or be jailed for a period of 15 days.