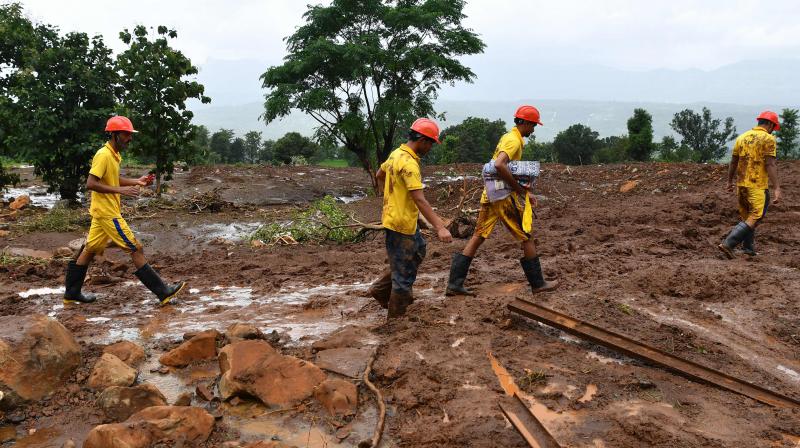 Rescue workers search for victims at the site of a landslide at Taliye, about 22 km from Mahad city on July 24, 2021, as the death toll from heavy monsoon rains climbed to 76, with nearly 90,000 others evacuated in the western state of Maharashtra. (Photo: AFP)

Mumbai: As heavy rains lashed many parts of Maharashtra and the India Meteorological Department (IMD) issued a red alert for five districts, two teams of Brihanmumbai Municipal Corporation (BMC) have left for Raigad and Kolhapur.

Meanwhile, National Disaster Response Force (NDRF) deployed 8 more teams in Maharashtra in the flood-affected areas. Now a total of 34 teams have been deployed for rescue and relief work at various places.

The two teams left for Raigad and Kolhapur on Saturday.

Another BMC team has left for Kolhapur to take necessary action in the flood-hit areas.

Recycling machines and other necessary equipment have also been sent along with the staff of the concerned employees who have left for Kolhapur. While using the machinery of the corporation, the Deputy Chief Engineer of Solid Waste Management Department Sunil Sardar's help is also being sought, as per a release.