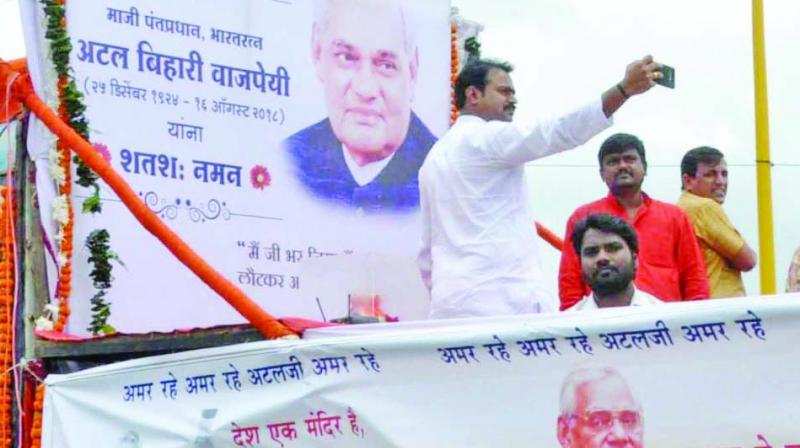 Mumbai: A selfie by the deputy mayor of Aurangabad, Vijay Autade, with an urn containing former prime minister Atal Bihari Vajpayee’s ashes has embarrassed the Bharatiya Janata Party. The move has invited criticism and demand for action against Mr Autade by AIMIM, which cited the beating of its own corporator, who opposed a resolution to pay tribute to the late Vajpayee.

The state BJP had been handed over 13 Asthi Kalash for immersion in 13 rivers. One such urn, containing ashes, reached Aurangabad for a procession on Friday. Mr Autade clicked a selfie with the urn soon after. This has brought to the fore the issue of insensitivity of BJP workers.

“The BJP is trying to use the goodwill of Atalaji for its own political benefits. That’s why this sad incident took place,” said Satish Chavan, Aurangabad president of Nationalist Congress Party.

All India Majlis-e-It-tehadul Muslimeen (AIMIM) leader Imtiaz Jaleel has demanded action against Mr Autade. “If the BJP is serious it should suspend Mr Autade. His behaviour reflects the city and state in poor light,” he said.

Mr Autade had beaten up AIMIM corporator Sayyad Matin a day after Vajpayee died when the latter opposed the resolution to pay tribute to the former PM. The Aurangabad police had arrested Mr Matin and booked five BJP corporators. AIMIM had said that action at the highest level would be taken against its corporator.

Meanwhile, Vajpayee’s ashes were immersed in the Arabian Sea near the Gateway of India in the presence of senior BJP leaders. Earlier on Wednesday, Prime Minister Narendra Modi and BJP national president Amit Shah had handed over urns containing Vajpayees ashes to all BJP state unit chiefs. The ‘Asthi Kalash Yatra’, on Friday afternoon, had several BJP leaders travelling in a boat and city unit chief Ashish Shelar and senior state minister Vinod Tawde immersing the ashes in the sea.