The two injured patients in the MICU are Sandip Manjre (27) and Waqar Safi (26) while Mashooq Safi Shaikh is on ventilator. 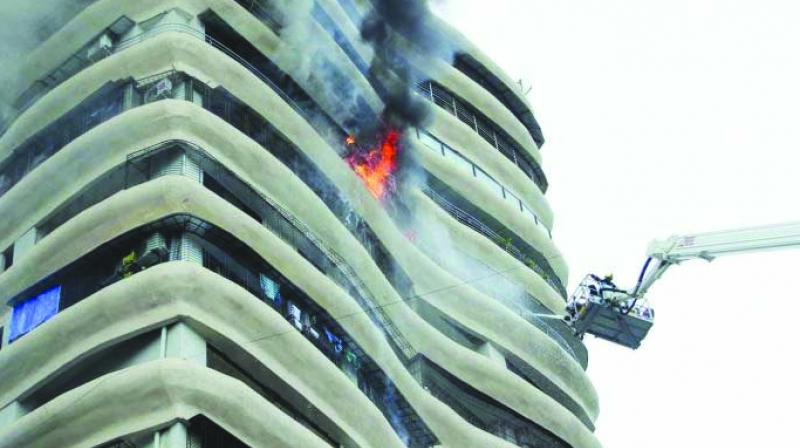 Fire that broke out at Crystal Tower in Parel.

Mumbai: One more victim of the fire that broke out at Crystal Tower in Parel was put on ventilator on Friday. Of the 16 people injured in the fire, five are still in hospital. Doctors at KEM hospital informed that Jayant Sawant was moved from the hospital’s Medical Inte-nsive Care Unit (MICU) to a ventilator.

Dr Avinash Supe, dean of the hospital, said, “Five patients are still in hospital. While two are on ventilator, two are in the MICU. Another woman, Veena Sampat, is in the intensive respiratory care unit (IRCU). All of them are stable and their health has improved. One fireman is also recuperating in the emergency medicine ward and is stable.”

The two injured patients in the MICU are Sandip Manjre (27) and Waqar Safi (26) while Mashooq Safi Shaikh is on ventilator. The two patients were shifted to ventilator after they developed acute respiratory distress syndrome (ARDS) due to smoke inha-lation injuries .

Dr Supe said, “Somet-imes, the inner injury to the lung can be the major reason for ARDS despite the patient  being on oxygen support. All patients are under observation.”

Veena Sampat, the mother of real estate broker Ashok Sampat who died in the fire, hasn’t been told about her son’s death. Ash-ok Sampat’s last rites were performed Wednesday nig-ht. Ashok Sampat had rus-hed to the building when his elder daughter Nidhi called him frantically, info-rming about the fire. His charred body was found in the lift along with another deceased, Sajive Nair. Ash-ok Sampat’s family requ-ested the KEM Hospital au-thorities to keep his mother in hospital a bit longer.