The maximum number of Ganesh mandals are located in South Mumbai areas. 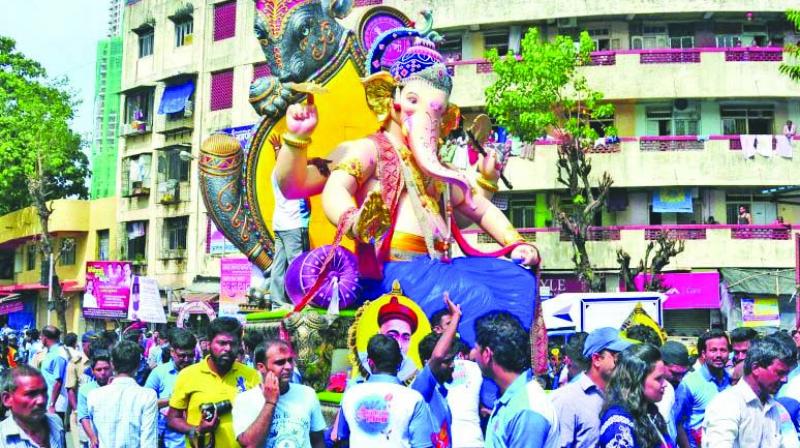 This Ganeshotsav too, expect roads to be dug up for erecting pandals. Reason: While the BMC has permitted around 2,500 out of the 2,700 registered Ganesh mandals to erect pandals.

Mumbai: This Ganeshotsav too, expect roads to be dug up for erecting pandals. Reason: While the BMC has permitted around 2,500 out of the 2,700 registered Ganesh mandals to erect pandals.  Significantly, the number includes over 50 mandals that violated terms and conditions last year, only to be let off with a mere rap on the knuckles.

Under the Bombay high court guidelines, mandals have to give an undertaking that they will not cause inconvenience to traffic and pedestrian movement, create potholes, violate fire safety rules or play loudspeakers after the appointed time.

Notwithstanding, over 50 mandals were found violating the high court norms last year, after which the BMC served them notice stating that they would not get permissions to erect pandals if they flouted rules. While, the BMC levied `2,000 penalty on mandals. Still, the civic body agreed to give these mandals permission to erect pandals this year as well.

Deputy commissioner of police, Manjunath Singe, said, “We grant permissions with an undertaking that all high court guidelines will be observed otherwise the next year, permissions will not be granted. There are BMC and police squads to check for violations, if any.”

Naresh Dahibavkar, president, Ganpati Mandal Samanvay Samiti, said, “Last year, some 50 to 70 mandals violated rules like not obstructing pedestrian movement. However, the issue was resolved after they gave an undertaking that in future, they would follow rules. We have conducted regional-level meetings, explaining the rules and regulations. It will be seen that no traffic and pedestrian movement is affected, sufficient space for the passage of ambulances is kept…”

Dr Mahesh Bhalero, who had filed a petition in the high court against pandals obstructing roads, said, “There is some change in the last three to four years as the guidelines are in place. The authorities do take action but more social awareness is needed.”

The maximum number of Ganesh mandals are located in areas such as Kherwadi, Girgaon, Parel, Lalbaug, Tardeo and Byculla, where heavy rush of devotees coupled with small roads often leads to traffic congestion.